A Dream Deeply Rooted: Remembering King on the Banks of the Harlem River

The elegant bronze statue of Martin Luther King, Jr. is smooth to the touch with alterations in color due to oxidation. Engraved below the statue is an excerpt from the world famous “I Have a Dream Speech” that solidified his place in history. The statue of Dr. King was created in the year 1970 by a young artist named Stan Sawyer. Sawyer created this statue two years after King’s assassination. You can find this monument in the Esplanade Gardens in Harlem, between 147th and 151st Street, along the Harlem River.

The power to change a nation socially, economically, and politically is rare. In fact, there are only a handful of leaders on the world’s largest stage who have accomplished this feat. Among these momentous leaders, we have Dr. Martin Luther King, Jr. King was the courageous and faithful leader of the Civil Rights Movement. A Baptist minister, he led this movement from the mid-1950’s until his assassination in 1968. Through his efforts, oppressed Americans (mainly blacks) were able to push through a change in laws and thus see a change in their quality of life. With a legacy that cannot be rivaled, this statue commemorating MLK allows us to reflect on what his compelling words meant and still mean for this nation today.

Dreams of the sort that Martin Luther King had emerge everywhere, and have always been the motivation behind making it to tomorrow for many blacks. In the 1959 play A Raisin in the Sun by Lorraine Hansberry, we see how dreams can carry an entire family through to “tomorrow.” We witness the family as they battle with the blistering heat of oppression. The title of the play is actually a reference to a question that Langston Hughes asks in a famous poem. In the poem, he speaks about dreams that were shunned, put off, or just plain forgotten about. Hughes asks, “What happens to a dream deferred?” Dreams like the dreams that blacks had for the abrogation of the laws and policies that had oppressed them for over 100 years after the Emancipation. Hughes asks whether these dreams ever fade, whether they shrivel up “like a raisin in the sun.” In Hansberry’s play, each member of the Younger family has their own unique dream: Beneatha, the youngest daughter’s dream is to become a doctor. The eldest son Walter’s  dream is for prosperity so that he can provide for his family. Like the subjectivity of the American Dream, we see the distinctiveness of their individual dreams. But we also see how much their happiness and sorrow are directly connected to the attaining or the failure to attain their dream. In the end, it’s the mother’s dream of a new house that comes true. Her dream was ultimately the most important because it united the family. Unity was also King’s ultimate dream, a dream that he didn’t live to see come true, but one that did nonetheless.

In King’s “I Have a Dream” speech, he said, “I have a dream. It is a dream deeply rooted in the American dream.” For me, this sentiment resonates with the influential nineteenth-century novel Ragged Dick by Horatio Alger. It becomes evident in the novel that a big part of the American Dream is hard work. By working hard, being determined, and persevering, any dream is accomplishable. The American Dream, as stated above, is subjective. It can be many things for many people: property ownership, family, relationships and/or monetary gain. Horatio Alger makes it clear on multiple occasions that Dick is extremely hard working. While his young competitors, (the other boot-blacks) only have one to two customers in the A.M., Dick has up to half a dozen. It’s clear that Alger’s goal is to emphasize that this is a result of Dick’s work ethic.

This ethic is relevant to the perseverance of African Americans during the Civil Rights Movement and even today with the injustices we face at the hands of law enforcement. By the end of Ragged Dick, Dick has saved over one hundred dollars. With barely enough money for himself, he never hesitates to give his money away to boys in need of help. But the part of this story that connects most with me and how I view Dr. King is when Dick dives into the river to save a drowning boy without fear of consequences or the motivation of reward. To me, this is metaphorically and almost literally what King did for African Americans. He dove in head first to save us from drowning in the tides of injustice. In the profound sense of the word, he was a lifeguard. The placement of his memorial statue near the Harlem River is thus an appropriate choice.

What’s sad is that even today we are riddled with inequalities that are rooted in prejudice and misplaced fear. Today, forty-plus years after the assassination of Dr. King, we still see the unfair treatment of people, people being treated inhumanely and without basic dignity. At times, with all the police brutality and all the racial profiling, it seems we haven’t moved too far away from the oppression that ignited the Civil Rights Movement. Though it is better hidden, there are still people with the capacity to harbor and act out such injustices. But I am also aware that the people who still believe in the ideas of King outweigh those who choose to ignore them.

Sometimes I take the time to analyze the world and the people around me, and I see so much misery, and I believe it’s understandable misery. I always keep a realistic but optimistic view of life’s occurrences, and this makes me a valuable source of encouragement. I always tell the people around me never to lose hope and to stay positive. I tell them to use their sorrow as fuel to motivate and inspire change. But more often than not, my advice falls on deaf ears. This is because the issues far outweigh the solutions in this nation, as our family, friends, coworkers and neighbors struggle with high unemployment, poverty and foreclosures. We see the government put into place laws like Stop and Frisk and Broken Window Policing that subject urban youths to demeaning treatment. This treatment sets in motion events that subject minorities to a cycle of oppressed thoughts and actions. 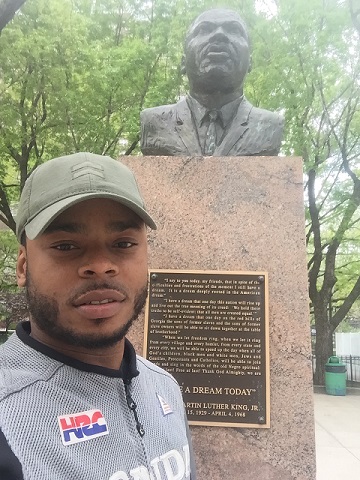 The author standing next to Dr. King’s bust in East Harlem

The majority of Americans are only familiar with the “I Have a Dream” Speech, but MLK gave numerous speeches and sermons about this nation and the importance of helping one another. King’s faith in this country and the people in it was one that cannot be ignored. In December of 1964, just one day after young adults were killed for seeking the right to vote, King won the Nobel Peace Prize for his nonviolent resistance to racial injustice. In his acceptance speech, he said “I accept this award today with an abiding faith in America and an audacious faith in the future of mankind.”  While standing next to Dr. King’s bronze bust, I pondered this “audacious faith.”  No one was around, and just being by the statue was euphoric.  I read his “I Have a Dream” speech out loud. For those few minutes, I was in his shoes in front of thousands delivering the greatest speech mankind has ever needed or heard. As I stood there, staring into the bronze eyes of King’s statue, I imagined what it must have been like to be in his presence and what it was like to march beside him. Being there gave me a new sense of pride and a new sense of hope for the future.