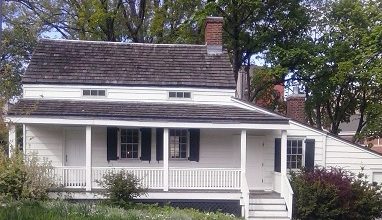 The Bronx, a residential section of New York City, has a few historical gems for history and literature enthusiasts sprinkled throughout the borough. Fans of literary author Edgar Allan Poe will be thrilled to know his home is open to visitors, easily accessible by bus or train. Since I am a native Bronx resident, I thought, “Why not stop by and see for myself the home of this famous poet?”

Poe’s Cottage is located at 2640 Grand Concourse on the property of the Edgar Allan Poe Park, a small plot of land between Kingsbridge Road and the Grand Concourse. The cottage is fenced off on the eastern part of this park. Poe’s quaint cottage sharply contrasts with the hustle-and-bustle of its urban neighbors, standing out, but not as an eyesore.

Poe is originally from Boston, Massachusetts. He was orphaned at a young age, and adopted by John and Frances Allan from Richmond, Virginia. John Allan was a tobacco exporter who enrolled Poe in the best boarding schools. Poe attended the University of Virginia but dropped out a year later due to debts from gambling (Edgar Allan Poe). As a child, Poe dreamed of becoming a writer, reaching his goal in 1827 with his first book, Tamerlane and Other Poems. He worked as a critic for the Southern Literary Messenger in Richmond from 1835 to 1837. His poem “The Raven,” published in the New York Evening Mirror (1845), is his most well-known work, but his fame didn’t help him financially (Biography.com). He was living in what is now the borough of Manhattan but had to move to the Bronx, which was then a part of Westchester County, in 1846 because his wife (and cousin!) Virginia Clemm became ill.

The Bronx was a rural place at that time. Thinking the serenity and climate would improve Virginia’s health, Poe rented a cottage for them and his Aunt Maria Clemm (Virginia’s mom). Virginia died shortly after, but during the short time he lived there he wrote different works such as “The Cask of Amontillado” and “Annabel Lee”.

The cottage offers guests a guided tour of Poe’s home, so on a bright sunny Spring day I traveled to my destination. The small house was surrounded by tulips under the porch, and the small plot of land it was on gave the impression of a little rural island in the bustling city. Upon entering, I was greeted by the tour guide who charged a small fee of three dollars since I was a student (children and seniors also pay three dollars, but adults pay five dollars). Two bedrooms—one on the first floor, another on the second—a kitchen, living room, and attic complete the interior.

It is a small place, one the tour guide stated, “a poor man would buy”. The kitchen, first-floor bedroom (where Virginia slept), the hall outside her room, and the stairwell are small and cramped. The ceiling in the upstairs bedroom dips down toward the wall, so that the wall and ceiling across the entrance are shorter. In the living room, there are portraits of the cottage by different artists, and in the hall outside Virginia’s room, a photo of Poe taken by Matthew Brady, a photographer from the Civil War Era. Two pieces of furniture owned by him survive: the rocking chair and mirror. The rocking chair is located in the middle of the living room, with a small table next to it. There is another chair pushed in the corner, with the mirror next to the window. To the left of the window is a desk with two chairs. This spot is thought to be the area where Poe worked.

I had studied some of Poe’s works when I was in college and remember them as dark, sober tales. Almost all of his works are dark, but I was pleasantly surprised when I read his short story “Landor’s Cottage.” In this story an unnamed narrator is hiking through a rural part of New York. While hiking, he notes the landscape and scenery in detail, which is mostly uninhabited. After a while, the hiker comes across a house, and here it is speculated that Landor’s cottage is based on Poe’s own cottage in the Bronx:

The main building was about twenty-four feet long and sixteen broad — certainly not more. Its total height, from the ground to the apex of the roof, could not have exceeded eighteen feet. To the west end of this structure was attached one about a third smaller in all its proportions: — the line of its front standing back about two yards from that of the larger house; and the line of its roof, of course, being considerably depressed below that of the roof adjoining…. The roof of the northern wing was merely an extension of a portion of the main roof. Between the chief building and western wing arose a very tall and rather slender square chimney of hard Dutch bricks, alternately black and red: — a slight cornice of projecting bricks at the top…. . The principal door was not exactly in the main division, being a little to the east — while the two windows were to the west. These latter did not extend to the floor, but were much longer and narrower than usual — they had single shutters like doors — the panes were of lozenge form, but quite large. The door itself had its upper half of glass, also in lozenge panes — a movable shutter secured it at night. The door to the west wing was in its gable, and quite simple — a single window looked out to the south. There was no external door to the north wing, and it, also, had only one window to the east (“Landor’s Cottage”).

This precise description is similar to Poe’s cottage, and suggests how much he liked his own picturesque home. “In fact, nothing could well be more simple — more utterly unpretending than this cottage. Its marvellous effect lay altogether in its artistic arrangement as a picture. I could have fancied, while I looked at it, that some eminent landscape-painter had built it with his brush” (“Landor’s Cottage”).

After the tour you can watch small documentary about Poe’s life and personally look around. You can purchase souvenirs from the gift shop, located at the entrance, such as postcards. I thanked the tour guide, satisfied with the knowledge I learned about one of many writers who have shaped American literature.