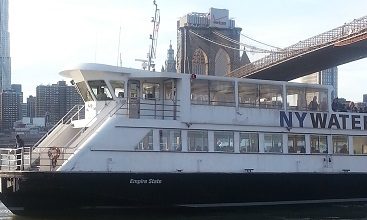 The trip on the East River Ferry was like no other trip that I had taken before with my children. I mean, we had been to Disney World, the place of every child’s dream, but even Disney World had not produced the excited reaction that I got when we boarded the East River Ferry to Brooklyn Bridge Park/Dumbo. It was a beautiful spring afternoon in April when we left from East 34th Street, in midtown Manhattan. After purchasing our tickets at the automated kiosk, a modern day technological improvement over “a man in a booth,” it was time to board the ferry. As we stepped onto the boat, I couldn’t help but remember a few lines from American poet Walt Whitman’s “Crossing Brooklyn Ferry.” Whitman sang, “Flow on, river! Flow with the flood-tide, and ebb with the ebb-tide! / Frolic on, crested and scallop-edge’d waves!” He continued:

Gorgeous clouds of the sunset! Drench with your splendor me, or the men and women generations after me!
Cross from shore to shore, countless crowds of passengers!
Stand up, tall masts of Mannahatta!—stand up, beautiful hills of Brooklyn!

Walt Whitman was born on May 31, 1819, in West Hills, Long Island, New York, into a family of Quakers. His father was originally a farmer, who later became a carpenter. When his father decided to take advantage of the building industry, he moved his family from Long Island to Brooklyn. After dropping out of school at age eleven, Whitman took a number of odd jobs and changed careers often in order to support himself. At the age of twelve, his family moved back to Long Island, leaving him in Brooklyn, where he would eventually make a name for himself as the editor of the Brooklyn Eagle.

Despite all of his eventual accomplishments and subsequent travels, Whitman always held true to Brooklyn. There was something about the borough that made him feel comfortable and at home; hence the reason for his free verse poem “Crossing Brooklyn Ferry,” which made its début in the second edition of his famous book of poems titled Leaves of Grass (Norton Anthology 993). In addition to his controversial poems on sexuality, Whitman was famous for his radical beliefs and opposition to conventional behaviors. One of Whitman’s most controversial contributions was when he applauded the Mexican-American War and “opposed the acquisition of more territory for slavery” (Anthology 993).

“Crossing Brooklyn Ferry” was written between 1860 and 1867, almost 50 years after the first ferry was introduced to New York City harbor. In the poem, Whitman describes the ferry’s trip from Manhattan to the exact spot where the Brooklyn Bridge was later to be built. In fact, prior to the building of the Brooklyn Bridge, the only way to get to Brooklyn was to ride the ferry. The Native Americans had built canoes and log rafts to travel along the East River to different parts of old New Amsterdam (now New York City), and it is believed that the stopping-points they left behind served as a blueprint for what we have today (“East River NYC“).

I am sure that many thought the construction of the Brooklyn Bridge would spell the end of river travel, but surprisingly, the East River remains a popular way to get around New York City. The river is used for leisure, historical sightseeing, and even as a mode of transportation to commute to and from work. Whitman rightly predicted that the river would continue to fascinate New Yorkers when he said, “Drench with your splendor me, or the men and women generations after me.”  Here I was nearly 160 years later riding the East River Ferry and experiencing the same “splendor” and reverential feeling as he did.

Despite the occasional slapping of waves against the ferry as other boats went by, the soft hum of the engine and the loud irruption of the boat’s fog horn, which sounded every time the ferry left the port, my family and I were immersed in  the beauty of the Manhattan skyline. As the boat traveled south, there appeared a magnificent view of the Empire State Building, standing majestically, while the sun glistened over it. Also in sight were the United Nations Building and the Chrysler Building. In the not too far distance, New York City’s most famous bridge, The Brooklyn Bridge, stood tall, with the American flag perched high above it, waving in the wind as if to greet you as you entered the Brooklyn harbor. Directly behind the Brooklyn Bridge, the Statue of Liberty loomed in the mist, as the clouds glided across her torch. The Manhattan Bridge and the Ed Koch Bridge (formally known as the Queensboro Bridge) could also be seen. The famous Pepsi Cola sign located in Long Island City was also recognizable as soon as you stepped foot on the Manhattan pier. The sign seemed like you could easily swim to it with just a few strokes.

As the ferry stopped at each point, passengers exited and boarded the boat, and as Whitman would say: “On the ferry-boats the hundreds and hundreds that cross, returning home, are more curious to me than you suppose / And you that shall cross from shore to shore years hence are more to me /and more in my meditation, than you might suppose.” This line describes Whitman’s life as a young man living in Brooklyn. During his residence there, Whitman would ride the East River Ferry to and from Manhattan to attend social and political gatherings (992). Though he knew why he was on the ferry, he wondered about all the other travelers’ destinations.  Similarly, the day I rode the ferry with my daughters, I had initially set out to get a real-life experience of the journey in order to write this essay; however, watching my children’s exuberance as the boat pulled away from the harbor, I understood that I had experienced so much more.

Kiki Melvelle is a senior and English major at Lehman College.