The 135th Street YMCA: A Gathering-Place for African-American Luminaries 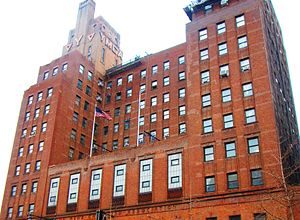 A towering beacon of red and brown brick with its recognizable red and white neon sign, the 135th Street YMCA has long been a monument in the Harlem community for African-Americans, many of whom came to New York from the South to escape Jim Crow laws, overwhelming oppression, and racial division. This iconic building was the place where segregation was addressed by many prominent politicians, writers, and speakers of the twentieth century who spoke in defense of the African-American community. 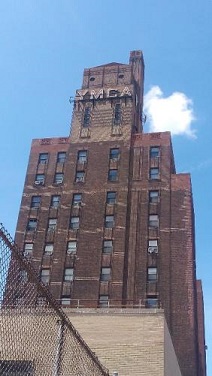 Located between Malcolm X and Adam Clayton Powell, Jr. Boulevards in upper Manhattan, the building was constructed in 1931 – 1932. (“Harlem YMCA”). The style of the building’s exterior is Georgian, a typical style of British architecture during the 18th and 19th centuries based on classical Greek and Roman architecture. (“Georgian Architecture”). Despite its classical design, the building has some modern touches—the neon signage, the canopied entrances, a smattering of air conditioning units, high intensity exterior security lighting, and energy-efficient windows.

The Young Men’s Christian Association (YMCA) became a focal point for African-Americans during the mid-1800’s as they discovered they could not obtain memberships in YMCAs patronized by whites because of segregation. In 1853, before the Civil War, “the first YMCA was established to serve African-American people, founded by a former slave … named Anthony Bowen” (“A Brief History of the YMCA”). As the southern populace moved towards Reconstruction (1865-1877) after the war, supportive leaders began to transform the lives of southern African-Americans through the “reconstruction of state and society,” impacting the community as a whole. (“Reconstruction Era”). While many Southern African-Americans were still adjusting to the impact of the end of slavery,  African-Americans living in the North, the Midwest, and the West were also feeling oppressed by their white counterparts as segregation continued to separate them, despite being freed men, hindering African-Americans’ endeavors to improve their lives. Author Nina Mjagkij’s book, Light in the Darkness: African Americans and the YMCA, 1852-1946 explores issues of segregation and racism and the role the YMCA played in the lives of African-Americans during this dark time. She writes that between 1875 – 1891, many supporters and members of the YMCA, such as white missionary workers concerned about the status of freedmen, white southerners who wanted to maintain racial harmony, and former abolitionists such as Cephas Brainerd, who served as an executive committee member for the New York City YMCA, supported African-American association work in YMCAs as a means of progressive solutions for the African-American cause (Mjagkij 18). It was during this time, around the turn of the twentieth century, that two prolific speakers, Mr. Booker T. Washington and Mr. W.E.B. Du Bois, would come to the forefront and definitively shape the thinking of African-Americans nationwide, particularly in the South.

Speaking at the Atlanta Cotton States Exposition in 1895, Booker T. Washington attempted to invoke action and a participatory relationship between Southern African-Americans and whites. Washington implored Southern blacks to continue to work hard to achieve agricultural and industrial success while adhering to a form of submissiveness to whites that would prevent conflict between the groups (Washington 1631-1632). Many Southern blacks at first accepted Mr. Washington’s appeal to cooperation. But, with time and further thought, they found that this appeal was unacceptable and not a means of moving forward.  Offering an opposing viewpoint, W.E.B. Du Bois argued a few years later that Mr. Washington’s views represented “the old attitude of adjustment and submission.” Du Bois believed that Washington’s strategy would result in the disenfranchisement of African-Americans, inferior legal status, and a loss of aid in obtaining higher education. Du Bois questioned how men could prosper if they had no political rights, continued to be submissive to whites, and had a lesser chance of developing their gifted men. (DuBois 1740).

In order to bring about positive change during this tumultuous period, YMCAs sprang up in many African-American communities, promoting fellowship and a common bond. As the Great Migration bought African-Americans north seeking opportunity, many gathered together and met collectively to gain political power and racial equality. The Harlem YMCA became a “a significant landmark of black culture” (“Harlem YMCA”). It was one of the places where African-American men met and gathered when most YMCAs denied them entrance and were for whites only.  The Y also served as “a living space” for men of color, being home to many prominent politicians, sports figures, entertainers, and writers, such as Dr. Martin Luther King, Jr., Malcolm X, Langston Hughes, Claude McKay, Ossie Davis, Ruby Dee, Jackie Robinson, and Jessie Owens, all of whom lent their voices to the cause of a community that had endured extreme adversity in their struggle to obtain the social, political and racial justice that eluded them during times of hardship and discrimination. Mr. McKay, whose name has become synonymous with the building because he lived there from 1941 to 1946, wrote a poem entitled “If We Must Die.” The poem tells of the spirit of men who choose to fight, overcome, and survive adversity:

If we must die, let it not be like hogs
Hunted and penned in an inglorious spot,
While round us bark the mad and hungry dogs,
Making their mock at our accursèd lot.
If we must die, O let us nobly die,
So that our precious blood may not be shed
In vain; then even the monsters we defy
Shall be constrained to honor us though dead!
Like men we’ll face the murderous, cowardly pack,
Pressed to the wall, dying, but fighting back!

Growing up a scant two blocks away from the Y, I could see its steeple as I walked to school each day or played in a nearby park. The red and white neon YMCA sign with its diamonds has always attracted my attention. I always felt the pride that seemed to come from the people who lived in the neighborhood, especially during the early to middle sixties. It was a generation where prolific African-Americans frequented the great night clubs and restaurants that populated the neighborhood. It was the generation of my parents and grandparents who embodied that spirit of community as they played a part in the forward movement of African-Americans during the turmoil of the Civil Rights Era. The 135th Street YMCA represents all African-Americans and particularly Harlemites through the many prominent African-American writers, entertainers, and political figures who have stayed or spoken at this historic building. In essence, the building has served as a waypoint for African-Americans who needed a stopping ground, for those who fled the South to escape racial, social and political injustice, causing a great migration or “exodus” to the North and Mid-west so that they could gain their voice and power.  The building is now a “National Historic Landmark” and part of a Harlem that “has shifted into a place with fewer poor, working-class and black residents and a growing number of Latinos and whites,” evolving into a community for all races  (“A Neighborhood YMCA Evolves”).

Mjagikij, Nina. Light in the Darkness: African-Americans and the YMCA, 1852-1946. Lexington: University Press of Kentucky. 2003. Print.