Stonewall: A Fight that Lasted a Lifetime

The Stonewall Inn, also known as Stonewall, is a gay bar located at 53 Christopher Street in New York City. It is one of the most important sites leading to the gay liberation movement and is still used today to support gay and lesbian rights (Stonewall Inn). In 1969, the original bar took up the building next door to it as well as its current building; both buildings are now part of the New York City Landmarks Preservation Commission’s Greenwich Village Historic District (Historic Data). The outside of the building is all brick with neon signs in the window, gay flags hanging, and a sign that says Stonewall Inn. The inside of the bar is small but takes up two floors and has two separate bars, which makes it awesome. The bartenders are quirky, happy people willing to have a full-blown conversation with you no matter the rush.

The presence of gay-friendly venues in New York City like the Stonewall Inn was not always a given. All through the 1950’s and 1960’s law enforcement kept track of homosexuals and the places that let them in. Police raided gay bars, shut them down, and then arrested the customers. It wasn’t surprising for gay men and lesbians to be exposed in newspapers, fired from their jobs and then sent to jail or a mental hospital. Homosexuality was considered to be a disease and was listed in the American Psychiatric Association’s Diagnostic and Statistical Manual of Mental Disorders as a “sociopathic personality disturbance.”  During this time, the United States Post Office would put your name on a list to monitor any “homosexual” packages you were receiving so they could tip off the police and have you arrested. If you were suspected of being gay, you could be shamefully discharged from the military, fired from your government job or job as a teacher or professor at a college.. You could even be arrested for holding hands in public with your partner (Gay and Lesbian History; Duberman).

During this time there were few places where gay members of society could get together. Seeing an opportunity, organized crime stepped in (the mafia) and opened gay bars in the city. Gay bars would get raided once a month and even though the owners would try and pay off the NYPD, they were still raided. The Stonewall Inn, owned by the Genovese crime family, had been turned into a gay bar in 1963. The bar was rudimentary, lacking amenities such as running water and proper toilets. The bar had a cue that would tell regulars to stop touching and dancing when a police raid was about to occur (Singleton). 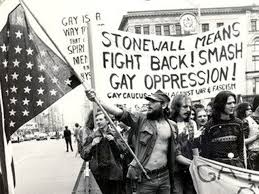 This pattern of harassment continued until June 28, 1969,  a day that would change history for gay and lesbian Americans and become known as the start of the Stonewall Riots. On June 28, at 1:20 am, police invaded the Stonewall Inn.. The normal procedure for these raids was to line up the patrons, check their IDs, and have female police officers take customers dressed as women to the bathroom to verify their sex. This evening was different, however. The police were had arrived but the patrol wagons to take away the arrested were not, and this gave the patrons enough time to react. They refused to follow police orders by not showing their IDs, and the men who were dressed up as women refused to go with the female officers to the bathroom to have their gender confirmed (Singleton). Patrons who were at the Stonewall that night and did not get arrested went outside to start a riot, and the crowd grew to 2,000 people. The crowd threw anything they could find at the police and shouted “Gay power.” Lasting for six nights, the riots led to thirteen people being arrested and four police officers injured.

The 1969 riots marked the birth of the gay rights movement, and Roland Emmerich tries to depict the events that led up to this day in his 2015 movie, Stonewall. The movie has sparked all kinds of controversy and is often looked down upon in the gay world. The movie itself is based on a fictional character named Danny who is Caucasian. The movie focuses very little on the riots itself, instead following Danny in his small town in Indiana before he moves to Greenwich Village. Someone looking for great LGBT history will not find it by watching this Stonewall, which is overly focused on its white, male protagonist and leaves out the role of women who participated in the gay rights revolution and who were present at the riots (Stone Wall Movie 2015) (Stonewall Controversy).

On the contrary, the book Stonewall written by Martin Duberman gives us an in-depth look at some of the participants themselves. The reader gets a good idea of what really went on the night of the riot. The book shows how gay and lesbian activists made history by making Stonewall a national organization. Duberman also does a good job by following his small group of people (characters) around, learning the most he can about the historical event. Duberman makes his readers really understand the difficulties that gays and lesbians faced during this time, although the book can become a little confusing because the narrative switches too much between characters.

The Stonewall Inn is recognized as the place where pride began in the United States. The riots that happened here are sad, but it seems as if they had to occur in order to make progress. Since the Stonewall riots, men and women of the same sex are now able to get married, start a family and live the life they want to live. Although, there may be some ups and downs here and there, gay couples now have hope. There are now many areas for gays throughout the world: in New York City it is not frowned upon if you are gay, but in the event you encounter prejudice, there is always a place for you at GAY NYC. The Pride parades one of the city’s biggest events. Usually a week long, the parades happen every year during the Last week of June to commemorate the riots (NYC PRIDE) and bring everyone in New York City and other states together to celebrate their Pride.