Spanish Harlem has been home to countless authors, artists, musicians and actors.  It encompasses 96th Street up to about 140th street from Pleasant Avenue to Fifth Avenue.  It is the prototypical urban environment with high crime and constant police sirens. However, there is a charm about it and if you grow up here you quickly fall in love.  There are a number of famous people who have called Spanish Harlem their home.  These include: Marc Anthony, Tito Puente and actor Al Pacino.  Perhaps the one person who embodies Spanish Harlem the most is the author Piri Thomas, who grew up all over Spanish Harlem but most notably on 104th Street between Lexington and Park Avenue. Unfortunately, his childhood home at 107 East 104th Street was demolished to make public housing, but his childhood friends’ home still remains at 114 East 104th Street.  It is a standard tenement building with about six floors.  I am sure it has been renovated since the time Piri’s friends lived there, but I can still imagine them playing stickball in the street in front and hanging out on the fire escape during those hot summer nights with no air conditioning.  It was these early days that began to shape him into the man and author he would later become.

A renowned author and poet, Piri Thomas is most famous for his autobiographical novel, Down These Mean Streets (1967), which documents his rough life growing up in the streets of Spanish Harlem during the Great Depression.  His struggles included but were not limited to crime, drug abuse, and poverty.  However, the largest obstacle Piri had to overcome was resolving his racial identity.  Piri Thomas was a dark-skinned Puerto Rican.  In fact, he was so dark-skinned that most people mistook him for being African-American.  He was a victim of racism, but it was especially confusing for him because of his Hispanic upbringing.  He was the darkest of all his brothers and sisters, but he was not African-American.  It was difficult for him to feel like he truly belonged somewhere.  During a conversation with one of his friends, Piri said, “I hate the paddy who’s trying to keep the black man down.  But I’m beginning to hate the black man too ‘cause I can feel his pain and I don’t know that it ought to be mine.’” (Thomas 124)  He then said, “I’m trying to be a Negro, a colored man, a black man, ‘cause that’s what I am.  But I gotta accept it myself, from inside.  Man, do you know what it is to sit across a dinner table looking at your brothers that look exactly like paddy people?” (124)  Piri wrestles with this inner turmoil throughout his early life and it clearly shaped him to be the man he became.  Piri would later spiral down a path of drug abuse and crime.  Ultimately, this path would lead him to prison.  But, there is a silver lining to his story.  After six years, Piri is paroled and begins to turn his life around.  Prison, unlike for most, truly was a chance for him to rehabilitate and become a productive and law-abiding citizen.

Spanish Harlem is one of the largest predominantly Latino communities in New York City and is made up of mostly Puerto Ricans.  According to the New York City Department of Health and Mental Hygiene, Spanish Harlem is home to 123,579 people with 50% being Hispanic and 31% African-American.  However, this was not always the case.  Spanish Harlem was once home to a large Italian population and a section of this area was the first part of Manhattan to be called “Little Italy.”  Spanish Harlem has historically been a low and moderate income area. According to the New York Post, it has the highest concentration of low-income public housing of any one neighborhood in the United States.  However, gentrification is beginning to change this aspect of Spanish Harlem.  In Piri Thomas’s novel, there was no gentrification and poverty was a very real problem for him and his family. 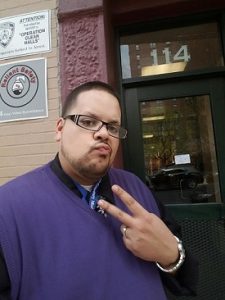 Poverty is a major theme in Down These Mean Streets.  Piri and his family lived during the Great Depression and were dependent on the social services provided by the government.  Even when his father was able to save enough money to move them to Long Island they were still poor.  This poverty forced Piri to resort to crime, such as robbery and petty drug dealing, to support himself.   After engaging in one of these robberies, Piri is arrested, put on trial and sentenced to a prison term.  Fortunately, he is able to rehabilitate himself in prison and lives a long and prosperous life.

Spanish Harlem will always hold a special place in my heart.  It is where I grew up. Although I did not live on the same block where Piri was raised, I walked the same “mean” streets Piri mentions in his book.  Spanish Harlem is cuchifrito spots, public housing and piragua sellers offering up a delicious mix of summertime and sugar.  It is standing on the corner chasing girls and hoping the police do not harass you.  It is hanging out with your friends making jokes and telling tall-tales.  It may not be a perfect place but it is MY place.