A True Cock and Bull Story of Lower Manhattan 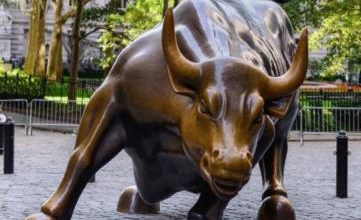 The Charging Bull, cast in 1989, currently stands in Bowling Green Park, which is located on Broadway and Morris Street in the historic financial district, in Manhattan, New York City. This massive bronze bull stands in the middle of the street, body leaning to one side in an aggressive stance—a main tourist attraction on any given day. The bustling crowds who gather and excitedly clamor for a picture with the aggressive beast probably don’t know the story of how the bull came to appear on Wall Street. 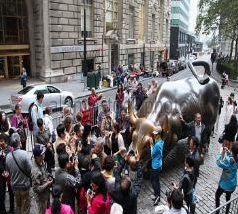 Instead, after scoring that all important picture with the bull, they disperse, heading two blocks up to beautiful Trinity Church. With tall spires and steep arches, Trinity Church is one of many tourist destinations within the financial district. A large placard on the front entrance is emblazoned with the words, “The Episcopal Church Welcomes You.”  Further along Wall Street is the New York Stock Exchange, the site where the Charging Bull made its entirely unexpected debut on December 15, 1989. 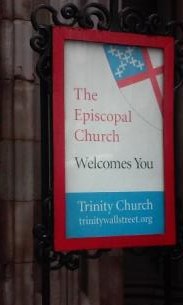 Upon first impression, you might assume that the historical significance of the Charging Bull represents only the idea of a “bull market.” This is an understandable connection. However, the real story is much more interesting. Picture this: a raging bull charges down the streets of Brooklyn. It thunders across the Brooklyn Bridge, trampling into Lower Manhattan. As it makes a beeline for Battery Park, charging up Broadway, it turns into a sculpture mid-gallop, and silently comes to rest on Morris Street. Even if this isn’t exactly how the story goes, the actual details of how the Charging Bull ended up as the symbol of the Financial District are just as intriguing.

The story begins with Italian-American artist Arturo di Modica. Born in Sicily, he saw the promise America had to offer. He wanted to make a grand gesture after the stock market crash of 1987, so he cast a bull in his SoHo art studio—a symbol of strength and power to represent the American people. 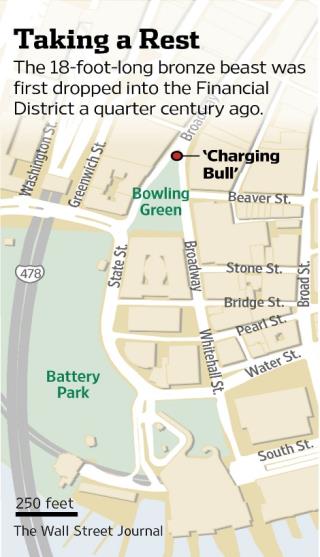 He transported it by truck to Lower Manhattan with the help of some friends in the middle of the night. Since the New York Stock Exchange had strict security, with police patrols occurring every few minutes, he had to come up with a strategy for unloading the sculpture without being caught. As one account records the incident, “The previous night he’d gone to the location with a chronometer to check, noting-that every 5-6 minutes the police patrol would come by, so he saw he’d have to drop the bull and get away within 4 ½ minutes” (chargingbull.com). Seizing his opportunity, Di Modica deposited the bull under a large Christmas tree that had been installed in front of the New York Stock Exchange earlier that day, and in the morning it looked like a gift to the city.

However, the New York Stock Exchange, channeling the spirit of The Grinch, had the police seize the sculpture, on which Di Modica had spent about $360,000 of his own money (which amounts to about $760,000 in 2016), and haul it away.  The bull was placed in an impound lot, and Arturo was forced to spend even more money to bail his symbolic bull out of jail!

There was a public backlash however, because many people had admired the sculpture in the short time that it was able to remain in front of the stock exchange, and it led to the New York City Department of Parks and Recreation eventually placing it where it currently stands today. 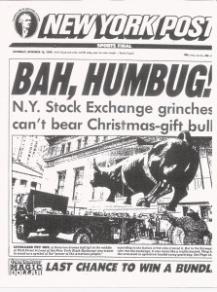 The sight of the Charging Bull and the thought of Arturo’s sting operation bring to mind the adventures of Richard Hunter Esquire, otherwise known as Dick, and his friend, Frank. In the nineteenth-century novel Ragged Dick or Street Life In New York With The Boot Blacks by Horatio Alger Jr., Dick starts out as a bootblack, otherwise known as a shoeshine boy. However, as one of the many homeless children living on the streets during the 1860’s New York City era, our fourteen-year-old hero is the embodiment of the American value of upward mobility. Beginning the novel as a spendthrift, he turns over a new leaf through a series of jobs, in which he shows his honest and endearing qualities. Dick’s story begins early one morning, at about eight o’clock, as he wraps up his last morning customer. Here’s a brief introduction about Dick from Alger:

He had been up an hour, and hard at work, and naturally began to think of breakfast. He went up to the head of Spruce Street, and turned into Nassau. Two blocks further, and he reached Ann Street. On this street was a small, cheap restaurant, where for five cents Dick could get a cup of coffee, and for ten cents more, a plate of beefsteak with a plate of bread thrown in. These Dick ordered, and sat down at a table…Our hero’s breakfast was soon before him. Neither the coffee nor the steak were as good as can be bought at Delmonico’s; but then it is very doubtful whether, in the present state of his wardrobe, Dick would have been received at that aristocratic restaurant (10). 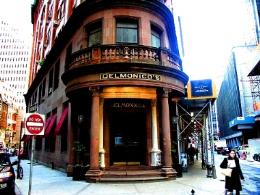 As he awaits a cheap breakfast, while wishing to eat at Delmonico’s, the famous high-end restaurant, Dick meets up with Johnny Nolan, his friend and fellow bootblack. However, Johnny is lazy, and a poor example of a successful go-getter. Many American ideals about work can be traced back to the belief that success comes from rising early and working hard while laziness is akin to disrepute. According to Alger, “now, in the boot-blacking business, as well as in higher avocations, the same rule prevails, that energy and industry are rewarded, and indolence suffers. (10). Dick was hard-working and embodied the very sentiment that Arturo di Modica wished to honor with his gift.
Weaving his way through the streets of Lower Manhattan, Dick stumbles upon a job as a tour guide for Frank, a wealthy boy of about the same age, who is visiting the city for the first time. While on tour, their sense of adventure takes them all over the city. After visiting the Fifth Avenue Hotel, they are almost swindled, but street-smart Dick spots the “drop game” early. They are also falsely accused of stealing an ornery woman’s purse while on a crowded bus to Central Park, but the truth wins out. During the course of their travels, they cover a lot of ground and visit The Astor House, Barnum’s Museum, The Customs House, The Old Bowery, Wall Street, and Trinity Church. As I retrace Dick and Frank’s itinerary through New York, I can’t help but wonder what they would think of Arturo’s Charging Bull. It wasn’t cast during his time, but he and Frank most certainly would have visited it during their tour of the city.

This brings us back to the Charging Bull. A little known fact about the bull is the mythical appeal of its supposed good luck. Tourists come from all over the world just to rub the body or horns in what amounts to a genie-of-the-lamp moment. However, for maximum good luck, many tourists rub the bronze gonads, or ‘bulls balls’. For them, it’s a symbol of bravery just to be able to gather enough nerve to touch the large, bronze orbs. For New Yorkers, bravery is found in our ability to overcome adversity and bounce back. Symbolizing the strength and resiliency of the American people, the Charging Bull adds a value to the community which transcends the mere acquisitiveness that the expression “bull market” might suggest.