From Rat to Umpire: A Central Park Journey 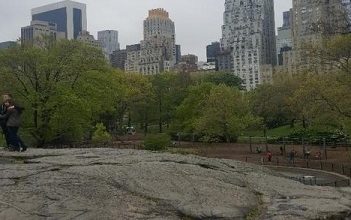 It is often bypassed and ignored—after all it is just a rock. Most of the people who actually stop to see and admire it are tourists. More than half of them accidentally come across it while visiting Central Park. Umpire Rock is known to be a schist rock and is located around 63rd Street inside the park. From afar, it just looks like a large rock but a closer look shows all it has to offer. Umpire Rock is visited to take pictures, sit and enjoy a book, have conversations, take pictures while others pretend to climb the rock, and watch children play while telling them to stay away from the edge and be careful. The most fascinating thing about this rock is the view. On one side you have a perfect view of three baseball fields where you can enjoy watching more than one game at a time. On the other side, you have what most people admire when they go there, a view of Midtown Manhattan.

A smooth hill-like area makes climbing the rock fairly easy. On top there are patches of grass, random smaller rocks scattered about and, in a corner, a bridge connects the rock to a playground. Umpire rock got its name from its perfect view of the three baseball fields right next to it but it was also once known as Rat Rock. This was because of the number of rats that would wait for nightfall and come together on this rock. Besides its view and its rats, Umpire Rock forms part of Central Park’s ancient bedrock, which is known to have been around for hundreds of millions of years. These rocks hold visible evidence of “epochal taking place long before the Dutch or even the Native Americans arrived on these shores. At one point it was illegal to climb Umpire Rock and people would get ticketed for doing so. The City Climbers Club put an end to this by coming to an agreement with the park authorities, adding safety features to make it safer to climb.

In the 1867 novel Ragged Dick by Horatio Alger, the hero, Dick, is a fast-talking, New York City boot-black who meets a tourist named Frank. Dick offers Frank a tour of the city in which they visit Central Park. At this time, Central Park was underdeveloped and didn’t have a lot to offer besides a few playgrounds and rocks. When the boys finally reach Central Park, Frank seems very unimpressed, and decides that he is not interested in visiting it anymore. Dick agrees, but says that Central Park won’t always be as uninteresting as it was then. “‘It’ll look better some time,’ said Dick. ‘There aint much to see now but rocks.’” (Alger 62). Although Ragged Dick had little education and had no knowledge of the rocks’ significance, he knew that Central Park would someday become a great landmark. With the help of a friend, Dick learns how to read and write, but by this time Frank is gone. Dick writes to him about the development in the park and how there is a lot more to see now: “There’s lots of things you didn’t see when you was here before. They’re getting on fast at the Central Park. It looks better than it did a year ago” (166). The architects Frederick Law Olmsted and Calvert Vaux were in charge of the development of which Dick speaks. They created the designs that would then be brought to life by nearly 20,000 workers.

Olmsted and Vaux, the architects behind Central Park

The bridge connecting the rock to the playground

Umpire Rock in all its glory

Central Park’s amenities are famous. And its rocks are not to be overlooked. Beside Umpire Rock, there are other rocks that are well-known in Central Park: Summit Rock is the highest natural elevation in the park and was the site of Seneca Village, a community of free blacks and Irish in the nineteenth Century, and Vista Rock, which is in the highest point of Central Park, is connected to Belvedere Castle.  While it may be tempting to ignore these rocks and focus on everything else Central Park has to offer, it’s always a good idea to stop and enjoy Central Park’s ancient bedrocks, just as Dick and Frank did in 1867.