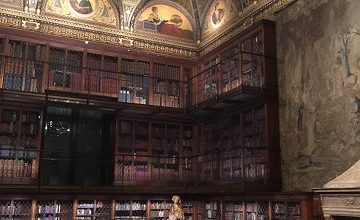 The Morgan Library, opened to the public in 1924 and the former home of Pierpont Morgan, is located on Madison Avenue and 36th Street in the Murray Hill district in Manhattan. Entering the large, vertically lined, bronze-gated door immediately provides the feel of stepping back into history. The Rotunda, the first part of the original library that the visitor sees upon entering, is decorated with floor to ceiling marble pillars at either side of a large wooden door. If this isn’t extravagant enough for the public eye, the East Room, containing the main portion of the library, is breathtaking: the ceilings are embroidered with carved wooden molding and picturesque paintings of ancient mythical figures. The walls are lined with three tiers of bookshelves filled from top to bottom with leather-bound books in all languages. Throughout the room, one finds objects on display from Pierpont Morgan’s travels, the majority of which consist of relics from Egypt. Morgan’s study in the West Room is no different—it is incredible to say the least: leather-bound, musty books encapsulate this room as well, not to mention the two floors of bookshelves in the West Room Vault. Morgan’s desk and worn-out red and gold velvet chairs are placed at the head of the room and betray their use and old age. Everything in the original part of Morgan’s Library speaks of age and importance.

It is easily understood why an author such as E.L Doctorow would want to include such an extravagant library and bibliophile in his writing. In Doctorow’s 1975 novel, Ragtime, Morgan is depicted as a curious, philanthropic man seeking knowledge throughout the world. An advocate of reincarnation, Morgan believes that even the forgotten knowledge of ancient civilizations can reemerge one day, which may explain his hunger to acquire vast collections of books and art. In chapter twenty of the novel, Morgan attempts to take Henry Ford under his wing and introduce him to the world of travel and education, particularly involving an expedition to Egypt. Morgan wants Ford to accompany him on this trip to dig for artifacts and to discover the secret to reincarnation. He tries to persuade Ford by asking him the question: “why should we not satisfy ourselves of the truth of who we are and the eternal beneficent force which we incarnate?” (Doctorow 151). Through these scenes, Ragtime channels Morgan’s obsession with knowledge and Egypt, which is also prevalently represented throughout his library. The East Room’s walls are almost entirely covered with seals, tablets, and jeweled objects that were discovered during Morgan’s excavations in Egypt during the nineteenth century.  Ragtime can be seen as a prehistory of Morgan’s time spent in Egypt, traveling along the Nile River and excavating treasures to bring home. Doctorow’s inclusion of Morgan’s enthusiasm in his novel allows visitors to the library to appreciate the dominant displays of Egyptian stones, gems, trinkets, statues, and ancient writings.

Ragtime’s portrayal of the library leaves readers with the notion that it is the legacy of a man who spent his life trying to live it to the fullest. Just as the classic song, “’S Wonderful” sung by Fred Astaire and Audrey Hepburn in the 1957 film, Funny Face, exclaims, “’S wonderful! ‘S marvelous! / You should care for me! / ‘S awful nice! ‘S paradise! / ‘S what I love to see!,” so too Doctorow depicts Morgan’s intensity and care in preserving the wonderfully exquisite artifacts in his library in his novel. In Chapter 36, Coalhouse Walker and his gang of rebels invade the Morgan Library and threaten to destroy valuables, such as “four Shakespeare folios! … a Gutenberg Bible on vellum! … seven hundred incunabula and a five-page letter of George Washington’s,” in an attempt to seek retribution for injustices (Doctorow 273). Morgan’s only response to Coalhouse’s invasion is “give him his automobile and hang him” (Doctorow 287). According to Doctorow, Morgan thought highly of his library treasures and was willing to comply with any demands, not excluding sacrificing human life, in order to preserve and protect his marvelous artifacts.

The Morgan Library began in the 1890’s as a private collection of Morgan’s literature, art, and artifacts that he had acquired through his travels. After the death of his father, Junius, Pierpont Morgan had access to the finances to begin making a great deal of additions to his collection. In other words, he needed to expand his library in order to create space for his massive assortment of art and literature. Morgan’s library was designed by Charles Follen McKim and was intended to be Pierpont Morgan’s private library. It was built between 1902 and 1906 and was located to the east of his New York home. After Pierpont Morgan’s death in 1913, his son John ‘Jack’ Pierpont began donating his father’s belongings to various museums (Gennari). In 1924, the library was declared a public institution. As Morgan’s collections grew, many new structures were added to the library over the years, such as the Annex building in 1928. Today the Morgan library includes Morgan’s brownstone home and takes up nearly half of a city block.

At once a generous philanthropist and corrupt financier, Morgan donated 62 million dollars worth of gold to help America after it fell into depression when its gold reserves dwindled in the 19th century. He singlehandedly saved America’s economy but then used his influence to reshape corporate structure to his benefit. Big surprise! Morgan’s influence seemingly stretched all over the world, from being the hero of the American economy to searching for and unearthing hidden truths in Egypt. Morgan’s library is a portrayal of everything he was in life: the knowledge he must have attained is depicted in all of his books, and his wealth and ability are seen through the endless marble lavished on the library. Both citizens and tourists of New York alike should stop by Morgan’s library and marvel at Morgan’s vast collection of literature and art. It is a sight worth visiting and offers various time slots of free admission during the week!

Gennari-Santori, Flaminia. “An Art Collector and His Friends John Pierpont Morgan and the Globalization of Medieval Art.” Journal of the History of Collections 27.3 (2015): 401-411. Web.