The Soul Food of Sylvia’s Restaurant 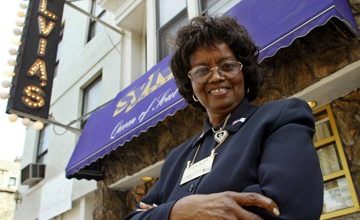 When I first arrived to Sylvia’s Restaurant in Harlem, New York, there were many things that came to mind: the smell of all the fresh dishes arriving at the table and people singing along to the music assured me that this was going to be a great visit. I also noticed the ambiance of African American culture with a hint of jazz throughout the whole building. There wasn’t a single staff member in the building who wasn’t smiling and the diners were of all different backgrounds, which showed me that Sylvia’s was definitely known widely for its exceptional soul food.

One of the famous dishes at Sylvia’s Restaurant

The menu at Sylvia’s Restaurant

There were many other things to take in upon arriving at the restaurant, starting with its decor. On the inside and the outside, the restaurant represents a sense of soul, heritage, and life all in one. It is more than clear that Mrs. Sylvia Woods, the deceased owner who established Sylvia’s Restaurant in 1962 along with her husband, Herbert Woods, has shown people all over the world who come in to eat that this is more than just a restaurant but it is a home. The different pictures of famous people who have eaten here are framed throughout the restaurant and include the President of the United States, Barack Obama, Al Sharpton, and even Diana Ross.

The restaurant has a rich feeling of comfort and the smell of the fresh cornbread being delivered to each table as a starter is a sign of how the business flows in Sylvia’s. One thing I loved about the restaurant was the color purple. Purple represents creativity and dignity. The waiters stated it was Sylvia’s all-time favorite color, and she wouldn’t have it any other way.

In the book Food and Culture in Contemporary American Fiction by Lorna Piatti-Farnell, Piatti-Farnell touches upon food and culture and how it ties in with African American lifestyles. Piatti-Farnell states, “Emphasizing a strong past lineage, the newly-labeled ‘soul food’ brought with it the ability to construct emblematic connections between African Americans.” The term “soul food” immediately calls to mind African American culture and the foods that we all grew up on, from our great-grandparents to our parents today. The term itself can easily be broken down to understand its roots: the soul comes from deep within and carries with it the meaning of soothing, which, if you are pairing it up with food, shows that these meals that African Americans came up with are very much sentimental. According to Piatti-Farnell, classic soul-food dishes include “fried chicken, barbecued ribs, pork chops, fried fish, collard greens, candied sweet potatoes, potato salad and cornbread.” Piatti-Farnell also explains how sugar and slavery went hand in hand with creating soul food. As the slaves were being introduced to these ingredients and having to cook for their masters, they learned to create recipes and meals that evolved into today’s food culture.

As a young woman, Mrs. Woods always wanted to make and own something of her own, but a restaurant wasn’t her first choice. With her husband, she started out with little to no money in the 1950’s. People remember her as very hard working since day one and as someone who always kept busy. When the opportunity arose to open up a restaurant, she and her husband seized it, though they never could have imagined that they would make history in the way they did. The restaurant did not exist only to serve diners, however, but to to serve authentic soul food, to share memories of what it is that many African Americans grew up on during slavery times or suffered for us all to be here today, and to show how important it is to African Americans to embrace their culture. Like all or many cultures, food is one of the primary ways of understanding a people.

Even though soul food is widely associated with African American culture, when I visited, I noticed that there were many tourists and people from other races coming in to experience the ambiance and taste of the restaurant. The history of soul food is what lives on here. It has created a story for many people, such as Sylvia Woods, to open up restaurants and shops to share with others what it means to be African American. My personal relationship to Sylvia’s is that I have visited the restaurant before about two other times. Both times I felt I left having learned something. I learned how much hard work and drive went into building this restaurant as well as all of the achievements that came with it. In 2014, the corner street between 126th St and 127th was renamed “Sylvia P. Woods Way” in honor of the late soul-food queen. Many people came out to support and acknowledge her memory on this great day. Born in South Carolina, Mrs. Woods opened a restaurant, which became one of the best soul food restaurants in New York City, and also a place to show what it means to live, breathe and enjoy all the great things that soul food has to offer outside of just a meal. 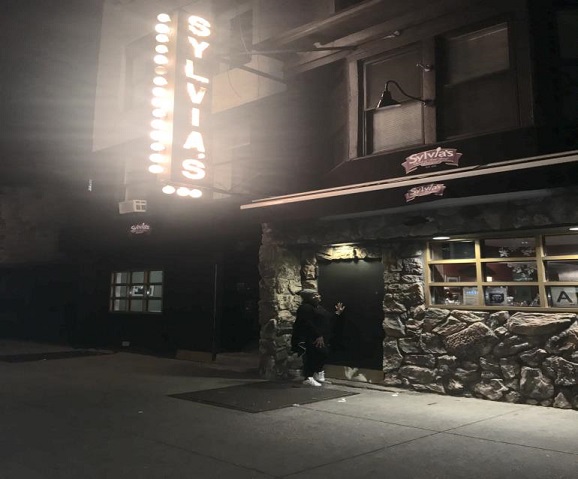 The author in front of Sylvia’s Restaurant