Recently, I visited the dueling grounds in Weehawken, NJ, where Aaron Burr shot Alexander Hamilton in July of 1804. I made my visit on a rainy and cloudy Friday afternoon. Aside from three to four other people around the site and in Hamilton Park, located right next to it, the area was deserted. 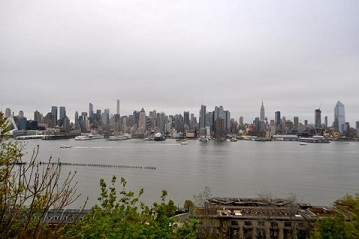 The bleakness of the day and the feeling of eeriness at the location evoked the tone of “The World Was Wide Enough,” the duel song in Lin-Manuel Miranda’s musical Hamilton. I visited with a friend who is obsessed with the musical, and as we stood on the grounds where Burr fatally shot Hamilton, we gazed over the Hudson River at the skyscrapers that steeple over Manhattan while we played the song. The impact of the lyrics was never stronger than it was that afternoon for the both of us. After shooting Hamilton, Burr sings, with regret, “I should’ve known, the world was wide enough for both Hamilton and me.”

There was not much to the location except a walkway above the dueling grounds, a statue with Hamilton on it, and the rock he rested on after being shot and before being taken across the river to New York, and a great view of the Manhattan skyline. In 2014, Miranda also visited the dueling grounds and found them to be lackluster.  As described by the journalist who went with him, “Miranda climbed on a low wall to look down the cliff’s edge, past scrub and trees, to apartment complexes below. ‘I didn’t expect it to be this manicured,’ he said. ‘I thought there would be some woods for us to walk around in.’” (The New Yorker).

Lin-Manuel Miranda’s hit Broadway musical, Hamilton, which premiered in 2015, has captured the attention of people all over the world with its catchy hip-hop soundtrack and the originality of having a cast made up mostly of actors from minority backgrounds. It tells the story of Alexander Hamilton and his rise from an immigrant orphan to one of America’s Founding Fathers. But what has made this historical musical such a hit with not only Broadway fanatics but young and mature audiences from all over the world is Miranda’s ability to make it so relatable by using hip hop to tell Hamilton’s story. The musical has become so popular that tickets to the show are almost impossible to get. It recently won a Grammy for best Musical Theater Album, where the cast performed their opening act, “Alexander Hamilton”; the Pulitzer Prize for Drama; and it has been nominated for 16 Tony awards.

The musical begins with the introduction of Hamilton, (here you can watch the cast performing at The White House) and proceeds to the meeting of Aaron Burr, Hamilton’s frenemy and the antagonist of the play. Later we meet Hamilton’s wife, Elizabeth Schuyler, and Hamilton’s sisters, who played an important role in his life and add a great deal of sentimentality to the musical. The musical also covers Hamilton’s role in the American Revolutionary War, his climb to being Washington’s right-hand man, and his controversial “beefs” with almost every other founding father. It ends with the portrayal of the duel between Burr and Hamilton and his death. The cause for the duel began with the presidential election of 1800: Hamilton votes for Jefferson, whom he dislikes, because he absolutely does not want to vote for Burr, whom he distrusts because of his alternating political ideals that shift to benefit him and not the country. Throughout the musical, Hamilton raps about Burr’s flipflopping: “if you stand for nothing, Burr, what do you fall for?” Burr becomes angry at Hamilton’s public defamation of his character and challenges him to a duel in Weehawken, NJ. Ironically, this was the same site where Hamilton’s son had died 3 years earlier, also being shot to death in a duel.

The dueling song, “The World Was Wide Enough,” is sung by Leslie Odom Jr, who plays Burr, and Lin-Manuel Miranda, who plays Hamilton. It starts off with Burr describing him and Hamilton rowing across the Hudson and arriving at the site with their seconds. Dueling was illegal in the states of NY and NJ, so everyone that was there had to turn their backs in order to have legal deniability. Burr, convinced that Hamilton was going to shoot him, instead of firing in the air, shot first. In the musical, before the bullet reaches Hamilton, time seems to stop while Hamilton performs his last soliloquy. At the same time, the musical does a great job making the viewer sympathize with the antagonist. In these last seconds, Burr sings, “history obliterates, in every picture it paints, it paints me in all my mistakes, when Alexander aimed at the sky, he might have been the first one to die, but I’m the one that paid for it.” We see Burr progress from being Hamilton’s first friend to being the person that kills him. Years after killing Hamilton, Burr would often refer to Hamilton as “my friend Hamilton whom I shot.”

My own friend has been obsessed with the musical ever since she first heard the soundtrack. Since the tickets are almost impossible to obtain, she enters the Hamilton Lottery almost daily. Anyone can enter this lottery to get tickets for the discounted price of $10! As my best friend and I stood watching above the grounds where Hamilton was shot, unto where he was then taken across the Hudson towards his friend’s home to die, I felt a sense of solemnity, and since then, my desire to watch the musical has increased. Hopefully one day I’ll have the opportunity to see this phenomenon in person. For now, there is the site of the dueling ground across the Hudson to bring me and other Hamilton fans a little closer to the exclusive play. It felt a bit surreal to be able to stand on this historical ground and see the very land that Hamilton fought for.