The Cover Girl in the Bay 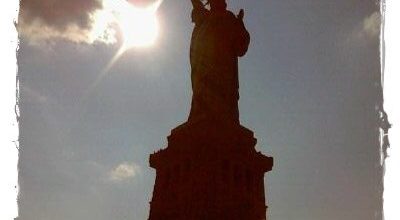 Skin made of bronze while standing 305 feet tall. This goddess watches over me day and night. Weathering any storm, she battles the elements. A symbol of liberty and freedom, she stands not just me but for all the world to see. Her beauty admired by most. She is the fairest of them all. Of French descent, the idealism of immigration, this majestic female balances with style.  She never turns her back on me even thought I never look at her. Always standing strong and proud, she is the inspiration of our nation. She is the cover girl in the bay. Asking in all the world’s weary, tired and poor. Never yielding, and forever giving.  If it’s Courage what you seek look no more. Her torch will light the way, she stands easy, breezy, beautiful, she is the cover girl in the bay.

A mighty woman with a torch, whose flame
Is the imprisoned lightning, and her name
Mother of Exiles.
– From “The New Colossus” (1883) by Emma Lazarus

This sonnet is engraved on a bronze plaque and mounted inside the lower level of the pedestal of the Statue of Liberty.  In “The New Colossus,” Emma Lazarus describes the Statue of Liberty as a symbol of immigration and opportunity.  The statue is of a robed female figure representing Libertas, the roman goddess, who bears a torch and a tabula ansata (a tablet). Inscribed on the tablet is the date of the American Declaration of Independence, July 4, 1776. At her feet lie broken chains.  The statue of liberty is a symbol of freedom.  Author Howard Fast conveys the message of Lady Liberty in his historical novel The Immigrants (1977), when a group of newcomers is arriving in New York Harbor: “Everyone was on the deck, the old and the young, screaming children, weeping babies, the silent, the terrified, the sick, the hopeful, nationalities and tongues in a flux of sound and tears and laughter.  The great lady of hope welcomed them, and this they had been waiting to see.  The Eighth Wonder of the World” (2).  The Statue of Liberty was and still is an icon of freedom, and throughout the adolescent years of the United States, it was a welcoming sight to immigrants arriving from abroad.  “Give me your tired, your poor, … / Send these, the homeless, tempest-tost to me” (Lazarus). “The New Colossus” sends out Lady Liberty’s message to all of those in need, promising a new land with no persecution because of their race or beliefs, a place where immigrants can begin again.

The Cover Girl in the Bay using Manhattan as her personal runway in Ghostbusters (starting at 1:32).

This iconic New York monument was given to the United States as a gift from France in honor of the Centennial of American Independence.  Since 1886, the Statue of Liberty has graced New York City Harbor with her presence.  The statue was shipped overseas to New York in three hundred and fifty pieces and it took about four months to put her together.  French sculptor Frédéric Auguste Bartholdi designed the statue officially known as “Liberty Enlightening the World.” 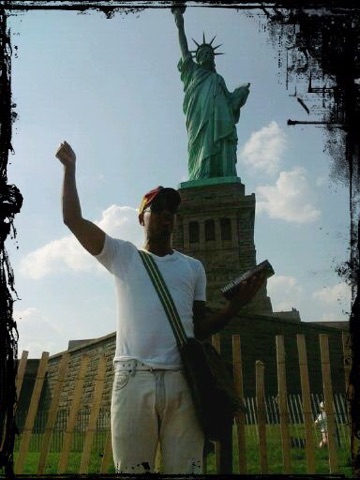 The author with the Cover Girl in the Bay

During my recent trip to the Statue of Liberty, I also visited Ellis Island.  “Ellis Island was the gateway for over 12 million immigrants to the United States as the nation’s busiest immigrant inspection station from 1892 until 1954” (“Ellis Island“).   I searched for my family’s origin but was not successful. I was overwhelmed with emotions while I was admiring the view of the city where I was born; at the same time I was reminded of a humorous story from my childhood. Growing up in New York City, I cannot tell you of the countless school trips to the Statue of Liberty. On this particular visit, I was in the fifth grade. It was a bus ride my teacher would never forget. The entire class sang a song by The Misfits, “Who Is She Anyway?,”  from JEM (an 1980’s cartoon about an all-female rock band) over and over. The purpose of course was to completely annoy the teacher who was so moved and passionate about our visit, and the civic lesson she was going to instill there. A mockery seemed to be the only way to express our enthusiasm, so we screamed, yelled, and bellowed “who is she anyway?” down the entire east-side highway all the way to Battery Park.

She acts like a queen
If you know what I mean
But she’s in for a big surprise.
She thinks she’s the best
But I’m not impressed
And I’m going to cut her down to size
Who is she anyway?

It frustrated our teacher tremendously, and we almost missed the ferry. For over a century, the Statue of Liberty has called New York City her home. Over a hundred years of clawing sea winds, torrential rains from all corners of the world and beating sun—unyielding, her copper skin only grows more beautiful.