DeWitt Clinton: Then and Now 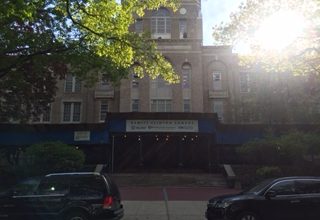 At first glance, DeWitt Clinton High School on Mosholu Parkway and Paul Avenue looks like a college campus because of its large baseball field, football field, and main building. On Paul Avenue you can find other schools that lead up to Clinton like Lehman College and the Bronx High School of Science. Originally, Clinton was an all boy’s school from 1897 until 1983 when it became co-ed. What started as a school of 586 boys is now a second home to almost 3000 students. Named after the New York City Mayor and Governor who began the public school system back in 1804, the school serves the district 10 community.

Notable alumni of Dewitt Clinton include James Baldwin, Countee Cullen, Stan Lee, Burt Lancaster, Ralph Lauren, and Tracy Morgan. Baldwin is the author of numerous books like Another Country and Giovanni’s Room. In his loosely autobiographical novel Go Tell It on the Mountain, he writes about his experience while attending a Harlem Pentecostal church from the ages of 14 to 16, years when he was also at Dewitt Clinton. Baldwin published his work in the school’s magazine, writing short stories, plays and poems. He graduated from high school in 1942 and published his first novel in 1953. Soon after he received a fellowship to keep writing and moved to Paris where he thought he could write more freely. At the time Baldwin attended Dewitt Clinton, the minority population was low as most of the students were white.

I feel they were totally unnecessary because it would affect me and others from getting to class on time and would make me feel like me and all my peers were criminals. There was an increase in violence because hundreds of us were rounded up like inmates. It was chaos every morning.

He also noted that parents were advised to send their children to school 40 minutes early because of the long lines the metal detectors caused. Another 2009 Clinton graduate said:

Clinton High School was huge! Couldn’t really blame them when they started using metal detectors. Some saw it as a waste of time and that they didn’t do much as far as safety went. If you ask me, it was better to be safe than sorry. It wasn’t the safest neighborhood but nothing we weren’t used to. Either way, the more protection the better.   – Edwin Jorge

It felt like you were walking into prison every day. Once I walked into class my teachers would shift my focus back towards my education. It’s just difficult to learn in a hostile environment.     – Luis Ortiz 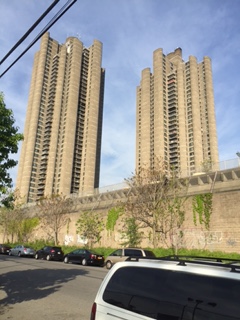 Today Clintonians have to worry about safety, and I wonder if these concerns weigh upon them as heavily as racial concerns weighed on Baldwin back when he was in school, or if they too still have to deal with race complications. It’s true that Clinton is full of minority students but all that means is that there are barely any white and Asian students, leaving a heavy Latino and African-American student concentration.

Baldwin chose to write about the black and white racial binary in a lot of his writing, and maybe his Clinton days influenced how he thought of himself in relation to his white peers. In Go Tell It on the Mountain, there is a scene where John, who is a stand-in for the fourteen-year-old James Baldwin, comes home to find his brother, Roy, has been stabbed by white boys. Gabriel, John’s stepfather, tries to blame John for his brother being stabbed because, unlike Roy, John has white friends. The whole scene is chaotic, but what stands out is that Baldwin had white friends and was much more religious then his brother who chose to hang out in the street and pick fights. Baldwin’s days at Dewitt Clinton must have influenced him to become one of the best-known writers and critics of what it means to be black in white America.