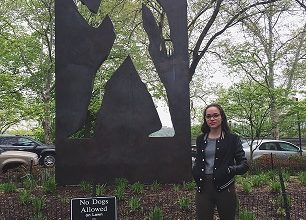 The Manhattan borough of New York City is home to many hidden gems. On 150th Street and Riverside Drive in Harlem, the “Invisible Man” sculpture is one monument worth visiting. Weighing 5,000 pounds and standing 15 feet tall and 10 feet wide, this rectangular bronze structure celebrates Ralph Waldo Ellison, the African-American novelist and scholar. Elizabeth Catlett created this monument while being inspired by Ellison’s 1952 novel Invisible Man. The structure visually represents the novel’s metaphor of invisibility through the hollow silhouette of a male figure. The Memorial features a quotation about Ellison’s experience in New York City, as well as a quotation from the novel.

Invisible Man, Ellison’s best-known work, follows the life of a nameless protagonist who constantly battles racial discrimination while searching for his true identity. He bears the hardship of feeling lonely while surrounded by others, of being judged because of his race and of struggling to prove his self-worth. The protagonist is raised in the South but the majority of the novel takes place in Harlem, New York, during the 1930’s. Early on we learn what causes the protagonist to feel as if he is invisible. He says, “I am invisible, understand, simply because people refuse to see me. When they approach me they see only my surroundings, themselves, or figments of their imagination—indeed, everything and anything except me” (3). The protagonist describes being seen through the “inner eyes” of people, which means that people choose only what they want to see in him. Because he is African American, society only sees his race. To the protagonist, feeling invisible is what motivates him to fight back, to be seen, to be heard, to be felt. The Riverside Drive location of this memorial would have resonated deeply with Ellison, as it is where he and his second wife, Fanny McConnell, lived in an apartment till he passed away on April 16, 1994.

Ellison was a musician and started playing the cornet at the age of eight. Later on, he would continue to pursue his love for music by attending the Tuskegee Institute, which had been founded by the race leader Booker T. Washington. Ellison was a music major in college, playing the trumpet. His goal was to be able to perform and compose classical music. But the summer before his senior year changed everything for Ellison. He traveled to New York City needing to raise money for school, but the Great Depression did not allow him to reach his desired amount.

During the Depression, Ellison began working for the New York Federal Writers Program, which fueled his inner writer. He discovered and strengthened his craft by writing short stories and essays for magazines such as the New Masses and the New Republic. Because of World War II, Ellison was eligible for military service by the Selective Service System, but luckily he was not drafted. He later became a cook for the U.S. Merchant Marine. Ellison did not begin writing Invisible Man until the war was over. This novel brought him immense success as a literary figure. In 1953, the novel won the National Book Award.

There are characters in the novel with whom one can draw a correlation to Ellison’s life. For instance, the protagonist attends an all-black prestigious college like the Tuskegee Institute and must chauffeur one of the white trustees around town. He is later expelled from school and forced to see the treacherous ways of the college’s president, Dr. Bledsoe, who is also African American and who charms those of the white race in order to safeguard his position. Dr. Bledsoe represents Booker T. Washington’s view of self-help and his praise of an industrious work ethic.

Taking a first glance at the Ralph Ellison memorial, you might assume it is just a figure of a man. You might wonder: “What makes him invisible? Why is this significant?” This monument will make you think about your role in society and how much of our true selves are captured by the way we appear. Do people see more than just stereotypes? Are we all invisible at some point in our lives? And do we perhaps make the most out of our invisibility? If you’re like me, then you may agree that labels and categories only exist to limit and to define us, which means looking beyond the groupings that reduce our identity.