Among the dying words of Theodore Roosevelt, the 26th president of the United States, were: “I wonder if you will ever know how I love Sagamore Hill.” Sagamore Hill, Roosevelt’s long-time home, nicknamed the “summer white house,” is located in Oyster Bay, a mere 45-minute drive from the Bronx. Roosevelt described his home as “separated by fields and belts of woodland from all other houses, and [it] looks out over the bay and Sound. We see the sun go down beyond long reaches of land and of water.” I came across these words in the visiting section of the museum, which provides a beautiful perspective on the significance of the summer white house to the man who occupied it. In his autobiography, published in 1913, Roosevelt shows us the beauty of his home, stating: “Sagamore takes its name from the old sagamore Mohannis, who, as chief of his little tribe, signed away his rights to the land two centuries and a half ago” (Roosevelt 265). The summer white house is painted red and blue and stands alone right on top of the hill. The house had been turned into a museum where visitors can get a sense of Roosevelt’s domestic life. He had a spacious porch that allowed him to enjoy an idyllic view. The 32 books he wrote during his lifetime can all be found in the home. 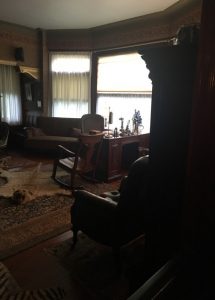 Roosevelt was born on October 27, 1858 and was raised in a wealthy family in New York City. Sagamore Hill was his residence from 1885 until his death in 1919. Roosevelt was in office from September 14th 1901 to March 3rd 1909. During his presidency, he was able to convert his home into the summer white house after telephones were introduced. The telephone allowed him to communicate with his staff and carry out the duties of the office of the president in the relaxation of his Long Island home.

Roosevelt’s connections to the area ran deep. His father had had a summer house in Sagamore Hill where young Teddy would spend every summer. Teddy loved to spend his summers there as a child. During his youth, he was sick with asthma, and this had deleterious consequences for his self-esteem, as he was viewed as physically inadequate. Because of his poor health, his father motivated him to utilize his brilliant mind in order to overcome his ailments, and Roosevelt thrived by spending time outdoors.

Roosevelt considered himself a naturalist and was our nation’s first conservationist president. He valued preserving America’s natural beauty, and he identified the American character that was deeply rooted in the western frontier as integral to American values, behavior, and identity. His interest in conservation grew out of his love for the outdoors and hunting. Sagamore Hill is lined with mounted trophies from his hunts in Kenya and elsewhere. This mentality was showcased in Roosevelt’s personal ideology and belief in what became known as American Exceptionalism, the belief that the United States has a special place in the community of nations based on its unique history, and this notion has dominated American political thought ever .

During the recent tour I made of the house, I witnessed Roosevelt’s deathbed, which had a profound impact on me. His quilt was covered with American and Cuban flags, which is a reminder of his heroism in the Spanish-American War, as well as being indicative of the love he had for this great nation. It is clear that Sagamore Hill was very meaningful to Roosevelt as he spent his formative years here and developed the mentality that would ultimately usher him into the highest office in the land.