There is a park located on 67 Mulberry Street in Manhattan, New York, close to the Brooklyn Bridge. It was designed by Calvert Vaux in the 1880s and was opened in 1897.  Known alternately as Mulberry Bend Park, Five Points Park and Paradise Park, it was renamed in 1911after Christopher Columbus, the Italian explorer who completed four voyages to the “New World.” Columbus had been looking for a shorter route to Asia for the spice trade, as spices were popular in his time and used in commerce. These voyages ultimately began the exploration and colonization of the Americas.

When he first landed in Cuba in 1492, Columbus thought that he had arrived in China. So it is a little ironic that Columbus Park in Lower Manhattan is named after him, because today it is inhabited mostly by people of Chinese descent and is located in the heart of Chinatown. The area is rich with Chinese culture, and there is a sense of community when you walk around there.  In front of the entrance, there were Chinese men sitting on milk crates playing checkers and joking around with each other.  Inside the park, there is a playground, basketball courts, ping pong tables, and a large open space with benches. The senior citizens rested on the park benches, from where they enjoyed live music played by other Chinese people who went to the park to socialize and relax. Everyone looked calm. Asian markets, stores, small businesses, and restaurants surround the park, while the neighboring streets are narrow and condensed. It reminded me of a mosaic.

When I was little, my dad had a medium-sized painting of Columbus’ ships in our dining room. The painting itself was fairly old, as well as the frame that surrounded it. I was always told, in Spanish, “This is the Niña, the Pinta and the Santa Maria. Cristóbal Colón sailed to and discovered America in them.” I would later find out that Cristóbal Colón was Christopher Columbus.  I didn’t know that he was responsible for the enslavement and genocide of the Native Americans until I was in middle school, and I wondered why my teachers didn’t talk about what really happened sooner. Throughout his voyages, Columbus carried a diario (diary) and recorded his observations. After he first encountered the Native Americans, he wrote in his diario: “They do not carry arms nor are they acquainted with them, because I showed them swords and they took them by the edge and through ignorance cut themselves…. They should be good and intelligent servants, for I see that they say very quickly everything that is said to them…” (32). Since Columbus and his men had guns and other advanced weapons, they were able to overpower the Native Americans.

Bartolomé de Las Casas, who initially was much like Columbus, changed his ways after he saw all of the atrocities committed against the innocent Native Americans. He wrote The Devastation of the Indies: A Brief Account in 1542. In this text, he carefully explains how the Native Americans were tortured, raped, enslaved, and killed by Christians like Columbus and his men: “Their insatiable greed and ambition, the greatest ever seen in the world, is the cause of their villainies… [They] spared neither the children nor the aged nor the pregnant women nor women on childbed, not only stabbing and dismembering them, but cutting them to pieces as if dealing with sheep in a slaughter house” (38).

While visiting Columbus Park, I got the chance to speak to a few of the park’s visitors. The first person I spoke to was a man in his early thirties who was of Chinese descent. When asked, “If Columbus would have arrived in China before he landed in America, how do you think the world would have changed?,” he said that China would be somewhat similar to how the U.S. is today – full of Europeans and ruled by white people. I also asked, “Do you think that what happened to the Native Americans would have happened to the Chinese?” The man said no, because Columbus wanted gold, silk, and spices so the only reason that he wouldn’t have hurt anyone there was because he needed things from them that he wouldn’t be able to get anywhere else. I asked three more people, a white couple and an Asian woman, the same questions. They all agreed that Columbus would not have done as much damage to the Chinese as he did to the Native Americans because of China’s advanced warfare system, Europe’s history with China, and because Columbus was looking to trade with them and was mainly interested in acquiring gold.

The area of Manhattan in which Columbus Park lies today was featured in a popular 1890 book, How the Other Half Lives. The book was written by the muckraking photographer Jacob Riis and shows how poor and homeless people lived during that era. Riis spent time in Chinatown, then known as The Five Points, and one of the most dangerous neighborhoods in the city. He took photographs of his surroundings and of the terrible conditions that people in the area had to live in. People and their families were cramped into small rooms in tenement houses with, as Riis wrote, “nothing to rescue them from the everyday dismal dreariness” (2, IX). Because there were often so many people in one space, they would get sick and die of diseases like tuberculosis. The way that Riis wrote about the Chinese people gave me the idea that he made a lot of judgments and generalizations about them before actually understanding anything about them. He wrote that “the Chinaman” smoked opium joints just as much as Caucasians smoked tobacco, which I thought was a little rude. Opium is a dangerous drug, and if people needed to escape temporarily, who could blame them for that—living in such terrible conditions? 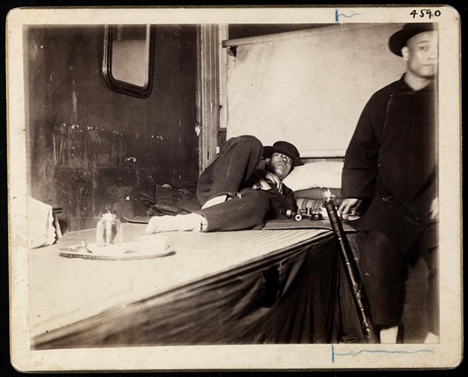 A man lying next to an opium joint

Eskenazi, Marc Philippe. “A Brief History of Christopher Columbus and the Spice Trade.” The

Loewen, J. W. (1995). Lies My Teacher Told Me: Everything your American History Textbook