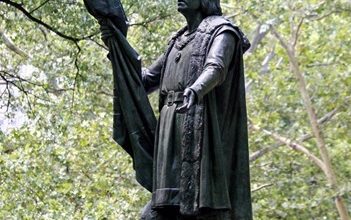 Among the many monuments that line Central Park’s Literary Walk, there is a statue of the explorer Christopher Columbus. Huge and eye-catching, it inevitably makes you want to take a closer look at it. Columbus is standing with his arms outstretched while in one hand he holds what appears to be a flag. Awkwardly placed underneath the flag is a globe and capstan, which is obviously meant to be symbolic of his sea voyages. What is also notable about the monument is Columbus’ deep gaze into the sky which gives the statue a very godly feel – meaning that Columbus can appear godlike or that it can look as if he is looking up to the gods.  This feature is best seen when looking at the monument from a front-facing position. A more specific description of the monument can be found here.

Before visiting this site, I ended up reading Kirkpatrick Sale’s Christopher Columbus and the Conquest of Paradise. I decided to read this book because I wanted to get a better understanding of Christopher Columbus and his legacy – and not just what the public school system teaches you about him in grade school. Sale’s text, according to its dedication, was written to pay homage to “those who were here first,” so I knew that I would be getting an unbiased account of Columbus and not reading just another book by an author who is 100% Pro-Columbus. In this book, Sale spends the first third addressing the voyages and what happened on them, while also talking about some of the inconsistencies in the stories that have been told about these voyages. In the second part, he discusses how and when Christopher Columbus earned the title of a legendary hero. Finally, in the last section, he writes about the lifelong effects that Columbus’s actions had on the new world and still have on modern-day America, and what we ultimately lost by gaining a new world. This text, published just after the 500th anniversary of Columbus’s death, highlights just how much of an influence this man still has in today’s society, even though there are still so many unanswered questions about his life and role.

In contrast to Sale’s even-handed approach, the Central Park monument of Christopher Columbus was dedicated in celebration of the 400th anniversary of Columbus’s first voyage and “the discovery of the new world,” according to the monument’s inscription. Unveiled in 1892, the monument had been in the works for many years. According to a New York Times article from August 15, 1871 entitled “Meeting of the Italian Committee A Statue to Christopher Columbus Proposed,” the Italian Committee not only thought that it would be a great idea to honor Columbus, but they also thought that the monument would be “an ornament to the city’s crowning beauty, the great garden of the people.” This essentially means that they thought that it would make the park look even better.

After reading all of this I was left feeling unsettled. I now looked at the monument differently. Not only were there problems with the accounts of the voyages that were given by Columbus, but there wasn’t even a good reason for constructing the monument other than the fact that it was aesthetically pleasing and that the Italian-American Community really loved him and were willing to pay for it. I found myself questioning if anyone really knew the purpose for this monument, or if they even cared.  My curiosity led me to talk to a twenty-eight-year-old woman in the park named Karen. She happened to be walking by, so I asked her, “Do you ever wonder why this statue of him is here as part of the Literary Walk?  He isn’t even a writer.” She seemed to think about it for a minute and then replied “No, not really. I guess it’s more for the tourists than us. It makes for a great picture!” She then went on to explain that she thought that he was pretty statue-worthy because of all his accomplishments. Following this, I was totally convinced that Kirkpatrick sale was right when he wrote:

But all they [European explorers] ever found was half a world of nature’s treasures and nature’s people that could be taken, and they took them, never knowing, never learning the true regenerative power there, and that opportunity was lost. Theirs was indeed a conquest of paradise, but as is inevitable with any war against the world of nature, those who win will have lost – once again lost, and this time perhaps forever (Sale 370).

My recent visit to the memorial has shown me the loss that we are experiencing. It is quite interesting that Columbus has earned a spot on the literary walk, seeing as he did not produce any profound literary works like other featured authors such as Shakespeare. He sits there only because of the letters he wrote about his voyages. We celebrate him blindly thinking that he has done great things for America when in fact he has robbed us of the opportunity to explore native cultures as well. The glorification of Columbus makes America seem like a very tainted place. Every year we celebrate the road that he has paved for us, but at the same time we unknowingly (or what is worse, half-knowingly) glorify and celebrate the genocide of native peoples. Sale’s book and Columbus’s statue depict just how much we have unknowingly placed our demons center stage instead of hiding them in the closet where they belong.

Brandie Failey is an English Literature major at Lehman College and a future educator. She loves nature and admires the work of William Wordsworth.