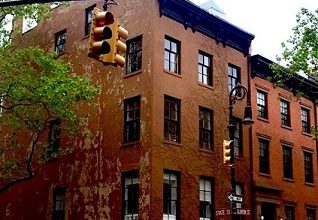 Isn’t it unsettling…that we can walk by a seemingly ordinary place and be completely oblivious to its extraordinary history? 169 Clinton Street in Brooklyn, New York is a completely unremarkable building. It blends into the Brooklyn cityscape like a grain of sand on the beach. Old, dull, and undistinguished, it sits on the corner of Clinton and State Street. The years have not been kind to this building, and the city was not at all kind to its former resident, American horror writer HP Lovecraft (1890-1937).

As I observe the building and get lost in thoughts and daydreams of what it must’ve been like ten, twenty, a hundred years ago… I see a group of men pass by and my first impulse is to ask them,

Howard Philips Lovecraft isn’t exactly a wholesome household name. In fact, he’s the opposite, one of the most influential twentieth-century writers of all that is weird, bizarre, and scary. Lovecraft was born, raised, and pronounced dead in Providence Rhode Island, but spent two tumultuous and terrible years on Clinton Street from 1925-1927 after his marriage and career fell apart. He moved back to Providence in 1927, and his friend W. Paul Cook said that Lovecraft had come back to Providence “a human being – and what a human being! He had been tried in the fire and came out pure gold” (Fooy). Clinton Street, where Lovecraft underwent the spiritual trial of which Cook speaks, is now part of the popular Brooklyn Heights neighborhood, but was considered part of Red Hook in the mid 1920’s.

Lovecraft’s distaste for New York City was not something he was shy about: he described his former neighborhood as being “decrepit,” and in a letter written in March 1927, Lovecraft recounts his apartment as “something unwholesome – something furtive – something vast in obnoxious slumber – that was the soul of 169 Clinton St. at the edge of Red Hook, and in my great northwest corner room” (Getlen). Anyone familiar with Lovecraft’s work is probably familiar with his short story “The Horror at Red Hook.” Lovecraft wrote this terrible little tale over a two-day span on August 1st and 2nd, in 1925, and it seems to clearly showcase the depth of Lovecraft’s disgust towards New York City and its inhabitants. “The Horror at Red Hook” is a mediocre tale at best, and it was not well received due to its flagrant racism and its verbosity. Apparently, even Lovecraft himself was not fond of, nor proud of this particular work, reportedly saying that the tale was “rather long and rambling, and I don’t think it is very good” (Selected Letters II). “The Horror at Red Hook” is about a writer turned detective named Thomas Malone. Malone moves to Pascoag, Rhode Island on medical leave after dealing with a horrific case in Red Hook. He wanders onto a commercial street where the buildings are reminiscent of those in Red Hook. The sight of these buildings sends Malone into a full-blown panic as he remembers – you guessed it – the horrors at Red Hook. After the panic subsides, Malone begins to recount his experience to the reader, taking her on a journey through the filth of Red Hook, and propelling her into a world of black magic, murder, and racism.

“The Horror at Red Hook”

As disturbing and unsettling as Lovecraft’s tales are, they are not real and they never will be. The real horror lies in the flagrant racism and bigotry present in “The Horror at Red Hook.” Lovecraft’s wife Sonia Greene gave insight into Lovecraft’s xenophobia, saying “whenever we found ourselves in the racially mixed crowds which characterize New York, Howard would become livid with rage. He seemed almost to lose his mind” (Carter). Lovecraft reportedly even referred to the immigrant population in his neighborhood as “a maze of hybrid squalor” (Getlen). Lovecraft’s xenophobia is evident throughout “The Horror at Red Hook,” and he uses the narrator as a proxy to convey his own opinions, describing Red Hook as “a hopeless tangle and enigma; Syrian, Spanish, Italian, and negro elements impinging upon one another, and fragments of Scandinavian and American belts lying not far distant. It is a babel of sound and filth.” Lovecraft’s distaste for immigrants may have been due to the fact that his ancestry could be traced to the Massachusetts Bay Colony in 1631. As a descendant of one of the original colonial families, he felt he could look down on others (Louks).

The writer’s disdain for New York City reappears in another of his works, the novel He (1925), which was also written while he was living in Brooklyn. The protagonist in He says,

“My coming to New York had been a mistake; for whereas I had looked for poignant wonder and inspiration in the teeming labyrinths of ancient streets that twist endlessly from forgotten courts and squares and waterfronts to courts and squares and waterfronts equally forgotten, and in the Cyclopean modern towers and pinnacles that rose blackly Babylonian under waning moons, I had found instead only a sense of horror and oppression which threatened to master, paralyze, and annihilate me.”

Lovecraft used both “The Horror at Red Hook” and He as a method to expunge all of the negative emotions he felt about life in New York City. Both works are quite obviously reflections of his own opinions and experiences, and writing them served as a type of catharsis for him. Lovecraft found the cultural diversity in New York appalling. He blamed immigrants for overpopulation and for his inability to find a job. I bet that sounds familiar, doesn’t it?

You’d think by now, close to a century later, that most of us would have a different perspective on the cultural diversity present in New York City…but, unfortunately, many people can still relate to Lovecraft’s discomfort and intolerance toward the immigrant population in his neighborhood. These people may not be writing stories about monsters, mysterious entities, or cults, but they are using immigrants as scapegoats for their personal problems and shortcomings, much like Lovecraft did all those years ago. 169 Clinton Street has been remodeled and updated to change with the times, and there is no reason why society can’t do the same by remodeling, renovating, and updating its attitudes toward immigrants in NYC.

Zayna Marjieh is an English Literature major at Lehman College and a future educator. She enjoys exploring coffee shops all over New York, usually with a bag full of books.