A Review of Nueba Yol 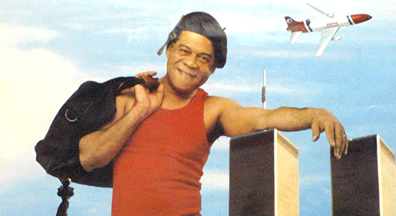 When I was a little girl in the Dominican Republic, my dreams about America were distant from the reality. White people with green or blue eyes was all I pictured. Big streets, snow, tall buildings, tons of food and electricity 24/7, it was almost impossible to believe. The people that lived in New York and came to visit had a scent on their clothes impossible to confuse. The smell of prosperity, the smell of New York. My big round eyes filled with envy to one day live that dream. People prayed every night hoping to be blessed with the fortune of going to New York. People even followed rituals to bring luck and get a visa. One of the rituals was going out on New Year’s Eve and running around “el barrio” with an empty suitcase. It might sound pathetic and absurd to many, but those are the hopes of poor Dominican people.

In the movie Nueba Yol (Dominican slang for New York), directed by Angel Muñiz, we can see how an innocent dreamer faces up to the cruel reality of the Big Apple. The movie was released by Cigua Films in 1995, and its main cast members are Luisito Martí (Balbuena), Raúl Carbonel (Fellito), Caridad Ravelo (Nancy), and Rafael Villalona (Pedro). The music in the movie was comforting and typical, composed by legends such as Celia Cruz, Sonia Silvestre, Felix D’Oleo, Luisito Martí, and New York Band. The movie was a big success in the Dominican Republic because it showed that there is no place like home and that dreams of New York are just that—dreams. The combination of actors, music, and especially the theme of the story make a great movie that translates an excellent moral.

Balbuena is an adventurous immigrant who comes to New York looking for a better life but discovers hardships in the land of his dreams. His friend Fellito pushes him to sell his house to get the money for a fake visa to go to New York. Fellito sells Balbuena on the dream that in New York money is literally flowing around in the streets. With the grand illusion of going to New York, Balbuena accepts and begins a new adventure. Soon, however, Balbuena realizes the misfortune of being an illegal immigrant and that he cannot find a job. The one thing he does find is love, with a woman who is returning to their homeland. After considerable effort and being kicked out of his friend Pedro’s apartment, Balbuena finds two menial jobs: washing dishes and moving furniture to earn some money to sustain himself. Life in New York is not so easy after all. A Nueba Yol se viene a guallar la yuca (Dominican slang for in New York one has to work very hard). Like most immigrants, we always find a way to survive, just as Balbuena did. However, one thing must be said: his ideas about New York are transformed completely. Missing his home country deeply, he begins a new chapter in his life with a different set of dreams.

The main character Balbuena represents the noble and honest immigrant population that comes to this country. For this reason, I connected with his character. Unlike his friend Fellito, Balbuena refuses to enter a life of crime. When he first arrives in New York, one of Fellito’s friends offers Balbuena a job as a drug dealer, but he refuses this offer. As a righteous man, Balbuena looks for a respectable job. I connected with this incident and the virtues of his character because many immigrants come to this country chasing a dream. Immigrants tend to be looked down on because people think we come here to commit crimes. In reality, not everyone is perfect, but this movie portrays Balbuena as a decent man like most immigrants. This movie will speak to any immigrant like me who knows the struggle of first arriving in America.

Nueba Yol takes a comical tone about a serious topic, which makes it very fun to watch. If you have ever dreamed, you can surely relate to this movie somehow. The way in which the film flows clearly conveys the message of hope. This movie took me back to when I was a child with the same dreams. I would recommend it to anyone who dreams about what New York is really like. The movie will make you reminisce about earlier memories and your experiences upon first arriving in New York if you live here. However, on the other hand, if you reside in your native country, it will open up your eyes to the reality of Nueba Yol.

Elaine Vasquez is an English major at Lehman College and a future early childhood educator. In her spare time, she enjoys traveling and reading romantic novels.