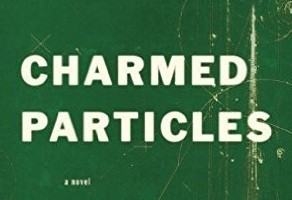 Do you like original adventures, gradual suspense, quirky characters, or a slight touch of wanderlust? If you answered yes to any of the above, then Chrissy Kolaya’s debut novel, Charmed Particles, might be the newest page-turner that you add to your bookshelf.

Nestled in the fictional, Midwestern prairie town of Nicolet, Illinois, the story centers a thought-provoking narrative about family, ambition, and the immigrant experience around the conflict between innovative progress in particle physics and historical preservation. When scientific ambition clashes with Nicolet’s small-town community values, the deep rift within the town is revealed through the portrait of the two young families caught in the middle.

Abhijat, a theoretical physicist from India, works at the physics laboratory in Nicolet. His ambitious nature has led him to America, and the cutting-edge research which is happening at the National Accelerator Research Laboratory.  His wife, Sarala, arrives in America shortly after their arranged marriage in India. Her struggle to assimilate to the American way of life is highlighted as she tries to keep Abhijat happy. Just like the early American settlers who struggle to adapt to the nature of the New World, Sarala must learn to craft a new identity for herself.  As she lives out the quintessential story of immigration, Sarala eventually stops wearing her brightly colored saris and cooking Indian cuisine. Their daughter, Meena, grows up to be a sociable girl whose popularity at school earns her a spot on the cheerleading squad. Although Meena is a bright girl who excels at her studies, her friendly and outgoing personality cause her to resist the idea of following in the footsteps of her overachieving and inattentive father, who is often preoccupied with work.

Contrasted with Abhijat’s family is Randolph’s. Randolph is a native of Nicolet; however, as an explorer, he delights in traveling to faraway and remote regions of the world.  Learning to live like the natives of these lands and acquiring treasured mementos for his daughter are his life’s mission.  He’s constantly in search of untouched territory. His young wife, Rose, his companion on many expeditions until her unexpected pregnancy forces her to stay in Nicolet, becomes devoted to and proud of their unorthodox marital arrangement. Their daughter, Lily, is extremely bright but socially awkward. Since Lily has a hard time making friends, she is happy to have Meena as her best friend. Although they may seem like social opposites, they share a unique bond.  During Randolph’s extended absence due to his exploration, Rose decides to run for town mayor. Sizing up her opponent as an older gentleman, out of touch with the newer generation, she can almost taste victory as she envisions an easy win.

All is pleasant and sunny in the town, which stages costumed reenactments of the Revolutionary War just for fun, until a new particle accelerator for the lab is proposed. The Superconducting Super Collider, used for high-energy particle physics is seen by the physicists as the only chance to prove the theories they have devoted their lives to, but the local community questions the safety of the large machine whose tunnels would be built under houses and schools. Citing risks of radiation, the tone of the community’s protesting becomes frenzied. Conversely, armed with enhanced knowledge about the collider and touting its harmlessness, the scientists, motivated by trepidation that their careers will be ruined if their proposal is denied, try to quell the protesters’ fears.

The suspense comes to a head when everyone must pick sides.  As Abhijat’s wife, Sarala must side with the scientists, even though most of her friends in the community are against this view. Rose, who is running for mayor, must decide to run against whatever platform her opponent chooses, even if that means running the risk of opposing the views of Abhijat and Sarala, the parents of her daughter’s best friend.

The beauty of this story is found in the intertwining of complex science, historical American tradition, and the constant striving for the idiosyncratic idea of community, which fashions our everyday realities. However, as the perspective for each side of the argument is presented without partiality shown to either, Kolaya never makes clear which side she supports. This novel steers clear of an explicit agenda. Many of the chapters are headlined with quotes, which act like clues on a treasure map, inviting readers to embark on a search for the essence of the story.  Other significant plot clues are the placement of an Indian family within a Midwestern prairie town and an explorer who is in search of terra incognita.  The public opposition to the particle accelerator is expected; however, it is significant that the scientists are unable to relate to the protesting townspeople using laymen’s terms. Perhaps this incomprehension shows that the risks associated with progress are not always obvious, and that these progressive scientists are unable to connect with their fellow humans. In whatever way we choose to read this novel, it will undoubtedly leave us with the question—which side would we choose? Scientific logic or fear of the unknown? This deceptively complex question lies at the heart of the novel. Whichever way we choose to answer it, and align ourselves, will be the genesis of an identifiable connection with either Abhijat’s or Randolph’s family.

While the characters are drawn from opposite ends of the spectrum, which is expected given the nature of the subject, their quirks and eccentricities make them all somewhat relatable. Beyond the main focus of the divide over the proposed particle accelerator are the endearing stories of friendship and love which elegantly accent the novel.  What was most enjoyable was the personal endearments of the characters as they evolved, becoming more complex and intriguing, and as a result, unpredictable. I thoroughly enjoyed reading this finely-crafted and original work, which sits on the fringes of the frontier as one of the first of its kind.

With an ambitious first novel, Kolaya has written intelligent characters with depth and interwoven them into a complex tale that is surprisingly engaging and thought-provoking. I would absolutely recommend this charming read as your newest escape. I look forward to more inspired novels from Kolaya in the hopes of expanding this original and enlightening frontier of literary thought.