Review of Malecón Restaurant: Finding Dinner and a Home in “The Heights”

Last December, on a particularly cold night, I huddled with a friend of mine as we ran from the exit of the A train to Malecón, a Dominican restaurant in Washington Heights. Upon entering, we were hit by the warm fragrances of fried chicken, sancocho, and various spices. My friend and I didn’t have to wait to be seated, like in other restaurants, which allowed room for an informal and cozy first impression. On this night, the restaurant was brimming with people and noise which, according to our waitress, Marí, was how it usually was during the evening hours.

The different voices (speaking Spanish, mostly) blended together and created a wave that almost blocked out the light presence of bachata coming from the overhead speakers. After giving us some time to look at the menu with mouth-watering anticipation, Marí greeted us with a smile and an “están listos?” She recommended the mofongo to me and so, of course, I took her up on it. My friend and I ordered the works: arroz con habichuelas negras, mofongo de pollo, tostones con ajo, and bistec encebollado. We were now, officially, in “The Heights.”

“The Heights” is a community known for having one of the greatest concentrations of Dominicans in New York. Though it is located in the borough of Manhattan, the density of lively Latin@ culture sets it apart from other neighborhoods. Unfortunately, many people avoid going out in Washington Heights. When they envision it, they see a community that has “more cops on the streets than fire hydrants,” as Dominican American author and Washington Heights native Angie Cruz puts it in her novel Soledad (3). To some, the poverty that exists in Washington Heights (poverty that exists in many New York neighborhoods) turns them off to the area. But these people, when they run from The Heights, miss out on the authentic culture that resonates throughout the community.

On the other hand, for another group of New Yorkers, Washington Heights is a modern and urban version of life back in La República Dominicana. Although here, in New York, Dominicans have to deal with harsh winters and the city lacks the beautiful beaches in Punta Cana, the values of family and culture are intact. The Heights is filled with collective activity that reminds its residents of life on the island, making it a vibrant second home for Dominican immigrants and a cultural foundation for those who were born in New York.

Malecón is one of the most famous of the many restaurants in Washington Heights that serve “fresh and authentic Caribbean food” (check out their website!). They prepare and serve dishes that are native to D.R. as well as food from other Hispanic cultures. To frequent visitor and “food fanatic” Ricardo (who sat at the table next to us), the arroz con pollo from Malecón is one of the best in the city. He explains, “They use the whole chicken breast instead of its parts, but it remains juicy—not overcooked. They also top the plate off with red roasted peppers, which add amazing flavor to the dish. Malecón serves huge portions, so you can bet that I’ll be taking some home with me.” And he is right about that. As Marí came back and set down my plates, I could already tell I would be taking a box home to my family. Ricardo beamed as he went on, “There is an overwhelming pride these employees take in serving their customers. I have had the same waiter for years because the minute he sees me he calls me over to his section. He enjoys serving us and to him it is an honor, not a job. I have experienced this from every employee, including when I have ordered to-go from the counter.”

Though Ricardo was eating alone, he was happy to join me and my friend in conversation and explained that, usually when he eats here, he has family or friends with him. He laughed lightly, remembering an occasion when “my family was visiting from out of town, and we decided to eat at Malecón. We were poring over the menu and no one could decide what they wanted to eat. I suggested we order several dishes from the menu, spread it around the table, and pick from them all. This was the best decision we ever made, and everyone was able to sample many different dishes.” 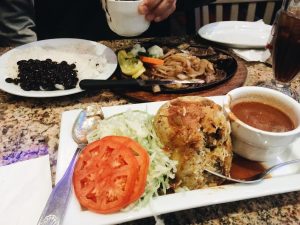 Part of my feast at Malecón

Whether they were fleeing the dictatorship or economic troubles, Dominicans who moved to New York in the twentieth century became an “other.” For the first time, they had to adapt to being considered minorities, to living in a world where they were seen as “foreign.” After being excluded from other cultural groups in society, they began to cluster up in neighborhoods close to each other (as many Boricuas did in the South Bronx). And in the Washington Heights we know and love today, Dominicans are the majority. Since the 1970’s, Washington Heights has been a “colonized” area, becoming the “core community and political base for Dominicans” (Torres 3). But life in New York for Dominican immigrants and other Latin@ groups hasn’t been easy. Dominican poet Sherezada “Chiqui” Vicioso’s poem “Perspectives” deals with the daily hardships of Latin@s in the city. She writes about the women who are hard-working, with “mistreated hands” and “bags permanent beneath their eyes and the men who have “lost their original humanity on these streets.” Vicioso’s poem is drenched with the hopelessness and disillusion that Latin@s have faced after moving to New York in search of a better life only to find great burdens.

In my dinner-time conversation, I decided to pry a little further and asked Ricardo whether he thought Malecón represented the New York Latin@ community. He looked pensive for a second before responding. “As different cultures assimilate into the United States, people begin to lose their identity…. Visiting Malecón allows me to experience my culture among my people, in my language, eating our authentic food. These people treat me like family and experiencing this in my own language makes the time even more meaningful. I bring my kids so that they can experience the same and understand the reason why we feel so connected with the place. I am Puerto Rican, and Malecón is owned and operated by Dominicans; however, the idea that these aren’t ‘my people’ has never once crossed my mind. I have been adopted by them and feel completely at home whenever I’m here. I love it and I will continue visiting them as long as they are around.”

Malecón is a treasure for two reasons. First, though this restaurant is in the middle of “Dominican territory,” it welcomes people of all Latin@ backgrounds. Personally speaking, the mofongo (a Puerto Rican dish) prepared here, brought me back to my great-grandmother’s cooking. I didn’t have to speak Spanish or use Dominican slang to receive a friendly reception from Marí. I was welcomed from the minute I walked inside. The restaurant is the eye in the middle of a storm of people of all backgrounds, sheltering us from the hardships of life and the blistering cold of the winter season. And secondly, for Dominicans, this is home. This is abuela’s kitchen; this is the bustling center of familiar faces, smells, and voices. This is a chunk of their identity, established and thriving in a country that has tried to push labels on them since their arrival. This restaurant serves as a comfort to the Eudocia’s, Rosa’s, and Maria Luisa’s of New York, the hard-working Latina women of the metropolis that Vicioso writes about in her poetry.

Ciara O’Neill is an English major at Lehman College, where she also studies Early Childhood Education. Her hope is to encourage young students to explore reading and writing in ways that transcend the classroom and that allow students to discover their creative abilities and interests. She spends much of her time writing poetry and travels often, looking for new inspiration everywhere she goes.