Ellis Island: Almost in “the Land of the Free”

When you leave the Ellis Island ferry, the main immigration building consumes your entire view. Red brick walls with tan trim, a terra cotta roof, and teal chimneys, and large, floor-to-ceiling windows with green frames reflect the architectural styles of the nineteenth century. A red iron and glass portico lines the path to the entryway to the main building. Hordes of tourists and visitors from different countries and cultures, myself among them, walk up to this main entrance. The architectural style is consistent across the many buildings on the island. These other structures are located to the west of the main building. They include a hospital with infectious and contagious diseases wards, an asylum for the mental ill, a kitchen and a laundry room, to name a few. These buildings, however, are in different stages of decay. Unlike the pristine, freshly painted main building, here windows are shattered, where there are windows at all. Walls near the waters of the harbor have crumbled, exposing the insides to further damage from the elements. Doors hang off frames. Tiles are cracked and missing.  Neglect, sea air, Mother Nature, and time have begun to wage war on them.

Yet these dismantled structures were once the landing spot and processing center for immigrants coming to the United States. Out of the thousands who walked the halls of these buildings seeking the opportunity for a better life, the very first was an Irishwoman named Annie Moore on January 1, 1892. Her ship departed Ireland on December 20, 1891, so she spent the Christmas holidays aboard the ship. Upon landing in New York, she is said to have anxiously and excitedly run into the immigration depot. She was ushered into the processing hall where immigration officials asked questions to verify her identity. Eventually, she was allowed entrance into the U.S. and was reunited with her parents who already lived here. In honor of her history here on Ellis Island, there is a statue commemorating her as the first immigrant registered. Annie’s immigration experience has also been immortalized in the song “Isle of Hope, Isle of Tears.”

Although Annie had a successful entry free of complications, this was not always the case for other immigrants to New York City. Upon entering the main building, immigrants were led up two flights of stairs. While they climbed the stairs, doctors would look over the railings and do a quick once-over of every applicant. Those with obvious ailments or thought to be sick were marked on the back with chalk. One of these markings was “P” for pulmonary symptoms. Another was an encircled “X” for mental derangement (History.com). Doctors were especially concerned with the eye disease trachoma. Although simply treated and cured today with antibiotics, in the 1900s, trachoma was incurable and highly contagious. These immigrants, often children, were forced to remain on Ellis Island to undergo treatment before being allowed entry into the country. 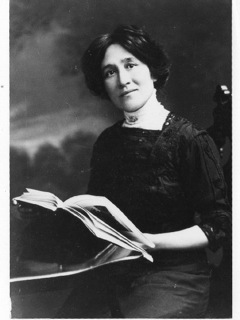 The hard times of immigrant families is a common theme in the writing of Sui Sin Far, the first Asian-American to publish English-language fiction in the United States. Sui Sin Far’s short story “In the Land of the Free” is centered in another port city (San Francisco, CA) but tells of the same checkpoints, sceneries, and emotions that immigrants faced on Ellis Island. Due to the Chinese Exclusion Act, passed in 1882, there was great stringency for immigrants of Asian descent who wanted to come to America. In Far’s story, Lae Choo, a Chinese woman whose husband lives in San Francisco, is not able to bring her infant child into the United States after returning home to China to give birth. Instead, the child is detained by social services until such a time when, with proper documentation, the family can be reunited. The cruel separation of the infant and his mother is what gives the story its ironic title about the so-called land of the free.

Ellis Island, so famous today, began as nothing more than a sandy island in New York Harbor. It obtains its name from Samuel Ellis, who purchased the land and built a tavern upon it catering to local fisherman (History.com). In 1808, the State of New York purchased the land from Ellis’s estate and used it to build military fortifications in preparation for the war of 1812. After the Civil War (1861-1865), immigration policies were turned over to the Federal government and money was allocated for the construction of the main immigration building in 1890. The building opened its doors on January 1, 1892. With the boom in immigration, more space was needed to process immigrants. In 1906, landfill was used to enlarge the island. The buildings for the hospitals, contagious diseases wards, and the psychiatric ward were built on this landfill. Due to changed immigration policies, the island became less important in subsequent years. According to History.com, “The Immigration and Naturalization Act of 1952, combined with a liberalized detention policy, caused the number of detainees on the island to plummet to less than 30.” Ellis Island finally closed its doors as an immigration depot in November 1954.

When I visited the island in October, against a clear cloudless blue backdrop, the horizon showed the New York City skyline in its entire splendor. The Freedom Tower rose above all the rest. The Statue of Liberty, in its magnificent grandeur, smiled in acceptance of all of us onboard the ferry. These symbols, old and new, represent a continued promise of liberty and freedom, both synonymous with New York. It was funny how, in that very moment, the past and the present collided for me into a singularly transcendent moment when I realized that thousands before me had gazed upon the buildings I saw. Thousands had teetered on the edge of their seats in anxiety, waiting for what was coming next, anxious to get off the boat and onto land, just as we were. We tensed in anticipation at having finally arrived on Ellis Island, anxious to relive the past. Ellis Island, though now closed, was, and continues to be, a symbol of hope and freedom.

America can only live up to this legacy by treating today’s immigrants to this country with respect and dignity. Given the recent election, the tense political climate, and its devastating aftermath on minorities in this country, many would do well to revisit our immigration history. America was founded and built on the backbone of immigrants. It is of utmost importance to remember how far we as Americans have come so that we may continue to progress and honor our legacy as “The Land of the Free.”