Have you ever found yourself in a place where you feel like you just belong? Have you ever wondered what took you so long to find that place?  From the moment I stepped into the Nuyorican Poet’s Café, located on 236 East 3rd Street in New York City, I felt as if the walls were screaming, “Welcome home Fatou!” Before I even entered, I remember seeing a bunch of people lining up, waiting, smiling, and talking among themselves like family. The Nuyorican Poet’s Cafe is one of the most legendary locations in New York City. Poetry lovers of all ages, cultures, and interests take a trip there. People with diverse talents come together in this special environment and pour out their hearts on stage. Whether it’s through works of literature, visual art, theater or even Hip-Hop, performers of all ages, cultural and religious backgrounds share something raw and pure with the community.There should be a sign on the door warning people about having their minds blown. Visitors should prepare in advance for the amount of snapping, clapping, and cheering they’ll be doing after every dazzling performance. New York City is known for its diversity and talent and the café embodied that beautifully and opened a space where people can come and share some of their artistic truths with the rest of the world.

A non-profit organization, The Poet’s Café was founded during the Nuyorican Movement in 1973 by the poet Pedro Pietri and Miguel Algarín, a poet and retired English professor who is still alive today. The Nuyorican movement, in which poets played an important role, made a big cultural statement to the rest of the world. The movement was spearheaded by Puerto Ricans who felt marginalized, discriminated against, and ostracized in U.S. society. Many of them faced hardships, such as violence, poverty, and a difficult adjustment to the new American culture. The word “Nuyorican” was originally used an insult but was later transformed into a term of prideful self-identification.

Pedro Pietri’s portrait outside the Cafe

Pedro Pietri was born in Puerto Rico on March 21, 1944. He moved to Harlem at a very young age and attended public school in New York City. As one of the founders of the Nuyorican Poet’s Café, he wrote poems to inspire and connect with others in the Puerto Rican community. His poems focus on the importance of nationhood and identity.  They tell stories while exposing a realistic understanding of what life was like for a Puerto Rican living in the United States. Pietri regularly performed his poetry at the Café, and was known as the poet laureate of the Nuyorican Movement. Perhaps his most famous poem is “Puerto Rican Obituary.” This poem shows the fate of Puerto Rican migrants who dedicated their lives to pursuing the American Dream. The poem asks, What does it mean to live for the American Dream? How much must one sacrifice to truly live the American Dream? The notions of deception and disappointment shape the poem, as Pietri shows us the constant challenges and hardships Puerto Ricans faced from the moment they entered the country. Having been misled to believe that there was something great waiting for them in the States, many of the the Puerto Rican migrants had to face a reality that they weren’t prepared for. The poem begins like this:

In the poem, the constant pressure of seeking a better life takes over the mindsets of the Puerto Ricans who seem as if they don’t want to cause any trouble. They are in the U.S. to work and earn money so they can provide for themselves and their families. Pietri shows us this when he writes, “They never spoke back / when they were insulted.” While his Puerto Rican characters face discrimination and prejudice, they choose to focus on what really matters to them, striving for a better life. Most of them are forced to  leave behind their Hispanic identity and accept an American identity. Pietri’s Puerto Rican characters sacrifice a lot to get a better life, but Pietri suggests that perhaps they are chasing the wrong dream. They sacrifice the wrong things, which prevents them from finding their identity, passion, and national belonging. Towards the end of this poem, Pietri focuses on not just the death of individual Puerto Ricans but on the death of the Puerto Rican spirit:

In this criticism of Juan, Miguel, Milagros, Olga, and Manuel, Pietri is sending a strong message about being true to your origins, no matter what obstacles or distractions lie in your path.

When it comes to the Nuyorican Poet’s Café, I also have my own experience to share.  In 2014, I got a chance to enter Urban Word, an annual spoken word slam competition. It was the first time I ever performed an original poem. My return to the Café this October was refreshing because of the talent and passion that it embodies. The moment the Café became visible, I couldn’t wait to get inside. When I did, it was packed. There were so many people inside and no place to sit down. The lighting, the poets, the vibes—everything felt just like home to me. While taking a picture of the famous Nuyorican wall art, I noticed an old man and a lady kind of blocking the full view. I asked them respectfully if they wouldn’t mind moving. The lady said, “You should be taking a picture of him.”  It turns out the old man that was standing with her was none other than Miguel Algarín, one of the founders of the Poet’s Café. It was a blessing to get the chance to meet him and take a selfie with him.

I’m sure I’m not the only one who feels at home at the Café. Many others find comfort and a sense of freedom there. Finding a voice and making it heard serves as an act of courage that can inspire future generations. If that’s not cool, I don’t know what is. 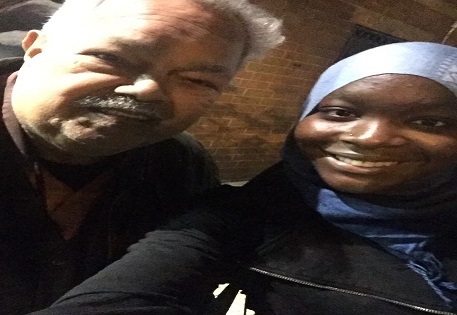 Selfie of the author with Miguel Algarin