In Remembrance of Fallen Soldiers: The “Dough-Boy” and F. Scott Fitzgerald’s “May Day” 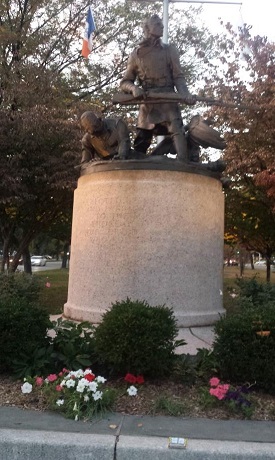 The “Doughboy,” a statue memorializing American soldiers who died in World War I, is found in the Bronx on Mosholu Parkway and Marion Avenue. Two soldiers and an eagle cast in bronze stand atop a pedestal about five feet tall. One soldier, helpless, lies on his side, while the other stands in position to defend his wounded comrade. At the feet of the alert soldier is the bald eagle, a symbol of strength, protection, and a call to arms, as well as a symbol of our nation.

The memorial was built to commemorate the many soldiers from the Bronx who sacrificed their lives for the United States during World War I. The Bronx Victory Memorial Association formed shortly after the war and decided to have this statue built as a primary to the Bronx Victory Memorial monument located at Pelham Bay Park. Trees were set aligned from the monuments to represent each life that had been taken in the war. A self-taught artist named Jerome Connor designed the “Doughboy.” Although the United States did not take sides until late in the war, many lives were lost (approximately 116,000). From the Bronx alone, 947 lives were taken (“Mosholu”). The sacrifice of the soldiers who participated in the war were commemorated through this monument, but it also conceals the suffering and struggles of veterans returning home as what occurs in F. Scott Fitzgerald’s “May Day.”

The short story “May Day” (1920) by the well-known writer F. Scott Fitzgerald describes the lives of some of the “Doughboys” returning home. The story begins with a New York City parade to celebrate the soldiers who fought in the war. However, the story’s deeper focus is on the postwar depression of 1920-1921, which affected the nation economically, socially, and psychologically.  War veteran Gordon Sterrett goes to his dear friend and former comrade Phillip Dean in need of $300 to get back on his feet. Dean refuses to give Sterrett $300 and instead gives him $80. Unable to relaunch himself into civilian life, Sterrett committed suicide.  All these men were summoned into the war, and even though they fought bravely alongside each other, returning home became the toughest adjustment for them. Why sacrifice yourself on the battlefield for your nation, but you’re unable to lend a hand to the wounded and helpless in your homeland? Sterrett suffered in the long run after defending his country but his sacrifice was celebrated through a statue, instead of providing him with benefits to start his life over.

The “doughboy” sets the vibe of how Americans confuse glorification of war from the slander of war. We have this ideology implanted in our minds that we must fight for each other to protect our country, to save our own asses, and deal with the consequences later. I can respect why the monument was built but I will not tolerate what it represents. I choose to respect it because the fallen soldiers represented are from the Bronx. But as I think about it, there were many other issues at the time of World War I, such as the Great Pandemic, which involved many people, including citizens of New York, getting sick from influenza. As well as The Great Depression that took place no longer than two years after the war had ended. Instead, the act of violence is being appraised by spending the necessary funds, to rebuild the nation, on a pretty, bronze statue that will hardly be viewed by citizens of New York. 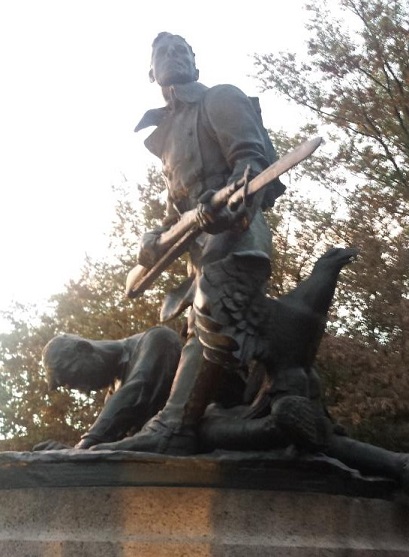 Detail from the monument

Nathaniel West once said, “In America violence is idiomatic.” Violence takes many forms, and there are many forms that are accepted in America. Fitzgerald comments on the consequences of violence in the third chapter of “May Day,” when a character asks, “What have you got outa war? Are you rich? Have you got a lot of money offered you? –no; you’re lucky if you’re alive and got both your legs; you’re lucky if you came back an’ find your wife ain’t gone off with some other fella that had the money to buy himself out of the war! That’s when you’re lucky! Who got anything out of it except J.P. Morgan an’ John D. Rockerfeller?” Where are the pride, unity and justice for such a sacrifice in war? Where is the glory that those soldiers deserved to have? Instead, they were honored with soliciting more money into the nation. Money that was promised to be returned through the World War Adjustment Compensation Act of 1924 through bonuses based on how long a soldier served in the war, but unable to receive that bonus until 20 years later. It’s mentally, physically and emotionally violent because although the government promised to help their veterans, there were still many of them out of work, many who were still suffering, and not receiving the benefits they deserved from our nation.